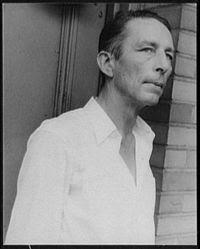 Yesterday was the anniversary of the death of one of my favorite poets, Robinson Jeffers (picture from Palouse Diary blog, hat-tip to Prof. Peter Quigley for pointing this anniversary out).

After decades of teaching a course in "philosophical ideas in literature," I finally assigned Jeffers in that class. We read "Give Your Heart to the Hawks" and "Apology for Bad Dreams". I was amazed to see how much the students like him. Why did I wait so long to assign his stuff? It certainly is philosophical enough! I guess its because my connection to him is so personal. I seem to assume that things that I love will be matters of complete indifference to just about everyone else. But what those kids saw in Jeffers was just what I had seen in him.

Here is one of the poems I of his I read the earliest and remembered longest. Along with Shelly, whom he admired, RJ was one of the most consistently pro-freedom and anti-imperalist writers ever. You get a glimpse of that here that here (note that it is written as a speech to his sons, Garth and Donnan):

Shine, Perishing Republic
In the 'thirties Jeffers' point of view was that of the current peace movement (dubbed "isolationist" by its enemies). After World War II, ten poems in his book The Double Axe (1948) were suppressed at the request of the New Dealers at Random House, doubtless because of the political heresies they contained. His correspondence with his editors, Saxe Commins and Bennet Cerf, makes very interesting reading today. You can see much of it in In this Wild Water: The Suppressed Poems of Robinson Jeffers, by James Shebl (Pasadena: Ward Ritchie Press, 1976).

At one point, Commins objects to "the frequent, damning references to President Roosevelt" on the absurd grounds that "he cannot defend himself and on that score there arises the question of fairness and good taste." (This was two and a half years after the sainted Delano's death.) At another point, Commins complains that Jeffers' comments on Roosevelt and Churchill are more critical than those on Hitler. Jeffers responded "I do agree that Hitler deserves worse than he gets but the whole world is full of people cursing Hitler." He wasn't the sort of guy who would say something because everyone else was. In fact he would avoid saying it, because everyone else was.

Even though Jeffers graciously agreed to suppress the ten most "objectionable" poems, Random inserted into the printed book an unprecedented "Publishers' Note," in which they expressed their disagreement with "some of the political views expressed by the poet in this volume," while deceitfully hypocritically claiming to support "the writer's freedom to express his convictions boldly and forthrightly."

Jeffers' popularity and his critical reputation were probably at their height in April 1932, when he was featured on the cover of Time magazine. After that, both began to decline, and have been sliding ever since. To me, he is more alive and important today than ever, with his utter lack of political illusions and his refusal to say anything but the truth as he saw it. One truth he saw with burning brilliance was that the glories of war and empire are illusions. Jeffers! Thou shouldst be living at this hour!

Interesting post, Lester! I partly grew up in Carmel, CA and used to walk almost daily along Ocean Avenue which runs along the whole of Carmel Beach and up around the corner (towards Big Sur direction). You may know that Jeffers built a home for himself there, including a stone tower, and I would always look up at it walking along the road there, thinking about him and some of his poetry which I read. This was in the late 1960s and no one lived there, the house just stood there, simply. I also attended Carmel High and Jeffers' granddaughter, Uma, was in my gym class. I didn't know her well, but she was a very pleasant and witty redhead.

Slight braino - 'Scenic Drive' is the beach road in Carmel, Ocean Avenue is the main street with shops. Early senility is creeping in!

Growing up near Tor House! How I envy you! Once, in those days, a few years after RJ died, I went there and walked past the house, thrilled to see it after reading about in his poems so many times. There was a sprinkler running in the English garden outside the front door. Suddenly a guy who looked exactly like him (from that distance) stepped out the front door, wearing a Pendleton bathrobe. He moved the sprinkler to a new position and stepped back into the house. I almost fainted from shock. I soon realized it must have been one of his sons, living in the house after his death, but it was the one and only time in my life that I really felt as if I were seeing a ghost!

Jeffers is certainly underappreciated these days!

The Purse Seine is one of my favorites, along with Rock and Hawk.

Brad, Good choices! "Rock and Hawk" is sort of the achetypal RJ poem. The most important themes are there, and contracted into very few words. For those who don't know it, here it is:

Here is a symbol in which
Many high tragic thoughts
Watch their own eyes.

This gray rock, standing tall
On the headland, where the seawind
Lets no tree grow,

Earthquake-proved, and signatured
By ages of storms: on its peak
A falcon has perched.

I think here is your emblem
To hang in the future sky;
Not the cross, not the hive,

Life with calm death; the falcon's
Realist eyes and act
Married to the massive

Mysticism of stone,
Which failure cannot cast down
Nor success make proud.