Driving in the Fog 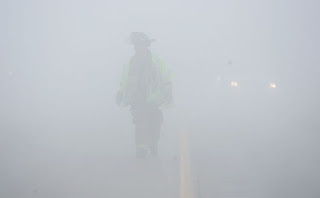 Yesterday at noon Nat and I were driving on the freeway from Oregon to Madison in my Jeep. There was a dense fog. You could only see about thirty feet in any direction. To get an idea of what it was like -- somewhat exaggerated, but not by much -- see the picture of the fireman at the left (Wisconsin State Journal photo). Suddenly a car passed me at about 65 miles per hour. I said to Nat, “If there is a semi jacknifed across the road ahead, that stupid jerk is going to plow right into it. There’s just no way he could stop in time in this fog!” About two and a half hours later, on Interstate 90 nearby, some drivers entered the fog and slowed down to the proper speed. They were rear-ended by a semi truck that had not. There followed a series of crashes that grew hideously into a 100-car pileup. It blocked both sides of the freeway and stretched for five miles down the road. One person said that cars kept coming in “like rockets.” Police estimated that some of the cars involved must have been going at 70 miles per hour when they slammed into their victims. Two people were killed and about fifty went to the hospital. Here is the WSJ article about the mammoth accident [don't miss the entertaining forum comments about “driving while stupid”], and here is an eyewitness account. Here, just for the heck of it, is a blog post on a similar accident near Fresno.

What stunned me about this was the very thing that amazed me even before the disaster happened: so many people were driving as if it were a normal day. Why didn’t more people notice that they couldn’t see a damn thing, and drive accordingly? I’ve been thinking about this since yesterday, and I think I have an answer of sorts.

As the late Aaron Wildavsky explained in a great little book called Searching for Safety, there are two ways a decision-making system can deal with error: resilience and anticipation. A resilient system spots errors and modifies itself accordingly. An anticipatory system aims to predict errors and avoid them entirely. “Trial and error” is a resilient principle. Anticipation aims at trial without error. Tradition is a clear example of a resilient system (if, at any rate, it remains adaptable and does not petrify). We do what we have done in the past. After all, it’s working so far, isn’t it? We will modify it if it goes wrong. “If it ain’t broke, don’t fix it” is another maxim of resilience.

Those drivers were using resilience. They were driving as they usually do, prepared to change if something were to go wrong. The problem with that is that “going wrong” in this case can mean killing someone or destroying your car. Driving is a context that obviously calls for anticipation. “Drive defensively” is an anticipatory principle.

What those drivers were doing was not quite as irrational as it looks at first. Resilience is often a very good strategy. In fact, it characterizes the state of mind most of us are usually in. They were simply practicing resilience at the wrong place and time.

In our lives we use both sorts of strategy, sometimes simultaneously. But we also tend to rely at times more heavily on one, and at other times more heavily on the other. To use anticipation for all hazards would be far beyond the capacities of the human brain. It would mean constantly thinking about everything at once. We have to rely on resilience as the default, background response to risk, shifting into anticipation when it is called-for. What is it that makes one or the other the more appropriate strategy? What should trigger the shift into the anticipatory mode? This is a fascinating question, and as far as I know it has not been explored. It should be.

In a way, we are often driving in a fog, and we always know there will be crashes ahead. The important question is which strategies we should adopt toward them now.
Posted by Lester Hunt at 1:19 AM

There's another reason for driving too fast in poor visibility - worrying about the idiots who are going to rear-end you because THEY are going too fast. I remember a particularly harrowing experience on I-10 in a zero visibility downpour. I couldn't pull over because I was in the far lane, I couldn't go too fast because I couldn't see, but I couldn't go too slow for fear of someone coming up behind me. It's terrifying doing 45 when you can't see anything in front of you!

Alexandra, Yes, I've done that. You try to find some medium between the possible-too-slow people in front of you and the possible-too-fast people behind you. Which is an anticipatory strategy -- adding one more factor to anticipate. But of course that's not what the people who were coming into the pileup "like rockets" were doing.