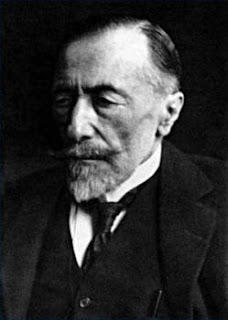 Darn! Yesterday, December 3, was the 150th birthday of Józef Teodor Konrad Korzeniowski, aka Joseph Conrad, and I missed it. Well, here is his Wikipedia picture and a belated birthday greeting, shouted across the abyss.

In a commemorative piece, Giles Foden (The Last King of Scotland) repeatedly characterizes Conrad as a Modernist. He seems to mean this as a compliment. I think he is twice wrong.

Perhaps the greatest single era in the arts in the West began in the late eighteenth century and culminated in the early twentieth century. Then some vicious idiot shot the heir to the throne of Austria-Hungary, and it all came crashing to a gruesome, brain-splattering end. After the war, Modernism spread like the Great Influenza Pandemic. Eventually, it turned art, once the breath of life, into a pointless game for over-educated snobs. (With all due respect, I think this is what James Joyce, the greatest Modernist of them all, accomplished.)

There are of course connections, both artistic and personal, between Conrad and Modernism, but he really belonged to the last generation of the great epoch that Modernism destroyed. Modern without being Modernist, ironic without being cold or nihilistic, romantic without being sentimental or confused, complex, subtle, and profound, his greatness is a chilling measure of that vast waste of time in the arts, the twentieth century. How he dwarfs them all! Now that we are waking up from the long, international nightmare of Modernism, it is time to start creating real art again!

(Hat-tip for these links to Arts and Letters Daily.)
Posted by Lester Hunt at 4:02 PM

Thought I'd pass this along.

Drake, Thanks -- this is interesting. I haven't found time to read all of it yet, but it is already clear that Gay defines Modernism much more broadly than I do. If it is something so inclusive that it goes all the way back to Baudelaire (and, I would guess, Whitman?) then it's hard to see how it could be over!