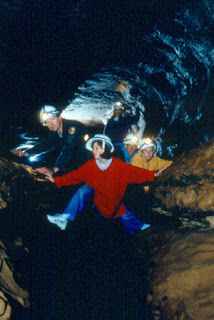 Mammoth, I mean. In terms of mapped passageways, the longest on Earth (367 miles). Sadly, I took no pictures at all when I was there earlier this week. The one at the left is from a government web site. Yes, it does depict something Nat and I actually did. Yikes!

I'm home for a pit stop, on the way to South Dakota. One thing I learned on the Kentucky trip -- Ralph Waldo Emerson (like P. T. Barnum, Jenny Lind, and other nineteenth century notables) visited the cave, and around the time that Thoreau was working on Walden, he wrote about it in the opening paragraphs of the essay "Illusions." (In Essays, Second Series, I think). Here is what Emerson said:

Some years ago, in company with an agreeable party, I spent a long summer day in exploring the Mammoth Cave in Kentucky. We traversed, through spacious galleries affording a solid masonry foundation for the town and county overhead, the six or eight black miles from the mouth of the cavern to the innermost recess which tourists visit,--a niche or grotto made of one seamless stalactite, and called, I believe, Serena's Bower. I lost the light of one day. I saw high domes, and bottomless pits; heard the voice of unseen waterfalls; paddled three quarters of a mile in the deep Echo River, whose waters are peopled with the blind fish; crossed the streams "Lethe" and "Styx;" plied with music and guns the echoes in these alarming galleries; saw every form of stalagmite and stalactite in the sculptured and fretted chambers,--icicle, orange-flower, acanthus, grapes, and snowball. We shot Bengal lights into the vaults and groins of the sparry cathedrals, and examined all the masterpieces which the four combined engineers, water, limestone, gravitation, and time, could make in the dark.

The mysteries and scenery of the cave had the same dignity that belongs to all natural objects, and which shames the fine things to which we foppishly compare them. I remarked, especially, the mimetic habit, with which Nature, on new instruments, hums her old tunes, making night to mimic day, and chemistry to ape vegetation. But I then took notice, and still chiefly remember, that the best thing which the cave had to offer was an illusion. On arriving at what is called the "Star-Chamber," our lamps were taken from us by the guide, and extinguished or put aside, and, on looking upwards, I saw or seemed to see the night heaven thick with stars glimmering more or less brightly over our heads, and even what seemed a comet flaming among them. All the party were touched with astonishment and pleasure. Our musical friends sung with much feeling a pretty song, "The stars are in the quiet sky," &c., and I sat down on the rocky floor to enjoy the serene picture. Some crystal specks in the black ceiling high overhead, reflecting the light of a half-hid lamp, yielded this magnificent effect.

I own, I did not like the cave so well for eking out its sublimities with this theatrical trick. But I have had many experiences like it, before and since; and we must be content to be pleased without too curiously analyzing the occasions. Our conversation with Nature is not just what it seems. The cloud-rack, the sunrise and sunset glories, rainbows, and northern lights are not quite so spheral as our childhood thought them; and the part our organization plays in them is too large. The senses interfere everywhere, and mix their own structure with all they report of. Once, we fancied the earth a plane, and stationary. In admiring the sunset, we do not yet deduct the rounding, coordinating, pictorial powers of the eye.

When I was in the Star Chamber, the illusion wasn't nearly pronounced, probably because they were shining too much light on the gypsum-crusted ceiling. Maybe that's why it didn't give me any deep thoughts about illusions.
Posted by Lester Hunt at 8:02 PM

I think my favorite memory of Mammoth Cave is that of the "Ghost".

I still remember the guides turning off the lamps and in the flickering glow of a lantern a woman appeared to be moving back and forth on the trail in front of us.

I still remember the story about early pioneers never exploring beyond that part of the cave because of their fear.

It is where the graffiti of the cave stops.

In reality it is nothing more than a trick of the cave walls and the subtle interplay of light flickering through an opening in the trail.

While you were at the caves did you stop by Corbin Ky.and visit the home of Col. Sanders?

I do admire the Colonel and his chicken. For years I've been trying to develop a recipe (my Crispy Sesame Fried Chicken) that is as crispy as the Colonel's Extra-Crispy -- so far, not even close! But, no, I have not made the pilgrimage yet. I only had a couple of days to visit, plus it would have made it even harder to stay on my diet!