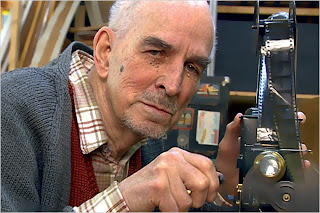 The great film maker died today at his home on the Swedish island of Faro, as reported here.

I have mixed feelings about this man. Pauline Kael says somewhere that he is the favorite director of people who don't like movies. If the thing that annoys you about the movies is that they aren't existential novels or turgid philosophical disquisitions, if they are just too darn interesting a too damn much fun, if you hanker and yearn for the gloomy and the depressing, then Bergman is your man. The fact that he idolizes Bergman has always seemed to me an expression of the neurotic side (is there any other side?) of Woody Allen.

On the one hand. On the other hand, he did make The Magic Flute, one of my two favorite opera movies (the other being Powell and Pressburger's immortal The Tales of Hoffmann). I also loved The Virgin Spring -- But then I'm a sucker for Medieval revenge tales, so consider the source. (I once read the entire Nibelungenlied while on a camping trip. What a nut!)

The thing about Bergman that is often overlooked is that he was a master storyteller. He also had a wonderful sense of humor, when he would allow himself to use it. Like all the great film makers, he told stories -- not in marks on a page or words around a campfire -- but in light. The level of interest in Bergman's work today is be a tiny fraction of what it was in the sixties, at its height. If he does survive, which he well might after all, it won't be because of the profundities his admirers see in his works, but because he was a great story-teller.
_________________________________________________
Added later: I later found out that Michelangelo Antonioni died the same day.
Posted by Lester Hunt at 11:49 PM

I think (and doubt you'd disagree) that this is a general point about art. Very few people would say of Kafka's work, "That is all and only what books should be like." And to the extent they would, it'd hardly be an occasion that engendered doubt Kafka the man: He's not the one making totalitarian claims about his work!

hey: a bergman post. i just put one up myself (kinda). bergman was one of my favourite filmmakers. so many good ones, he made. and all of them had some haunting quality about them, even "smiles of a summer night", which is meant to be more light, comedic.

Yes, I do agree with you. To some extent I was probably reacting to memories of the sixties, when Bergman was so esteemed that the experience of viewing his movies was always accompanied by the feeling of "and in the future all movies will be like this." What a nightmare! Like you say, though, that's not what B. was saying, only his crazier fans.