Wow! The Nobels Give the Prize to Someone Who Deserves It! 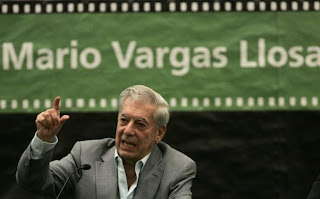 The 2010 winner of the Nobel Prize for Literature is one of my favorite living authors: Peruvian expat Mario Vargas Llosa. Here is a student at Princeton University, where Vargas Llosa is currently a professor, blogging about his addressing some students about the award:

I just returned from attending the reception in the Chancellor Greene Rotunda honoring Professor Mario Vargas Llosa, this year’s recipient of the Nobel Prize in Literature. I am still fighting an overwhelming sense of wooziness from having just observed history in the making. As I stood listening intently to Professor Llosa’s words, I could only marvel at how beneath his humble, sophisticated demeanor, there exists this remarkable internal landscape of profound wisdom, astute intelligence, and unbounded passion. Professor Llosa is the embodiment of an individual who dares to exercise the freedom to think independently and to follow the pathway paved by his ideas, as evidenced in his writings on freedom and his decision to run for the Peruvian presidency in 1990. In witnessing Llosa speak of the importance to read with a voracious appetite, I was moved by the profound power of ideas. Llosa described reading as one of the greatest pleasures life affords us. To carry on the message, propitiously in time for midterms but also for life....

I couldn't have said it better!
I would describe his aesthetic as nineteenth century realism updated with a post-modern sensibility. His works are often big, epic in scope, thematically ambitious, and yet absorbingly narrated. Well-known factoid: about a quarter century ago, he underwent a sort of political conversion, instigated by his young son Alvaro, from collectivism to individualism. Afterward, he had a heated encounter in the Mexico City Opera House with collectivist Gabriel Garcia Marquez which ended with Vargas Llosa punching Marquez in the nose.

Every ten years or so, he publishes a collection of essays that are very much worth reading. One essay I remember especially fondly was written the day he finished reading the complete works of José Ortega y Gasset (and I thought I was a big fan of Ortega!). He says it is a shame the twentieth century did not place him in the position occupied by Jean Paul Sartre. One reason Ortega would have been a better choice: mejor prosa.
Update: I told the above story about the Mexico City Opera House from memory. I've since found out that the incident occurred before V-Ll's conversion. Neither man has ever divulged the cause of their quarrel, which seems to have been personal and not political. Further, the blow was to Marquez's eye, not his nose. We at E pur si muove! are zealous to avoid becoming a source of misinformation, like so much of what you see on the web.
Posted by Lester Hunt at 11:12 PM

In case anyone gets the idea that words failed Llosa in a debate, Marquez had screwed his wife. It was a sucker-punch but richly deserved.

I know zip about his work, and after googling, I concluded his interest in political leadership makes him ineligible for further time.

The students "overwhelming sense of wooziness " is perfectly understandable. When I was seventeen, my professor brought a small group of us to the Parliamentary Hill office of John Diefenbaker. I was totally enchanted with his abundant coruscating charm. He was very old, but I remember thinking this is either the greatest man I have ever met, or the greatest bullshitter.

Meeting other PM's, politicians, actors has taught me that their common thread is their ability to enrapture hypnotically.

I wish he had won the Noble Peace prize, because the delicious irony of having punched someone in the nose somehow continues the nonsense that has plague this once prestigious award.

Hell, now that Pappy mentions it was over a woman, I might actually read his work.

It sounds like you are assuming that Varga Llosa is a politician. He's a writer who once ran for office (his victorious opponent was also a non-politician at the time). I don't think he has the character or personality of a politician in any way shape or form.

Pappy's comment about screwing V-Ll's wife is pure speculation. Neither man has ever divulged the reason for their quarrel. Eyewitnesses got the impression that it was occasioned by something Marquez had said to V-Ll's wife.

Frankly, the idea that someone married to V-Ll would consent to having sex with Marquez instead is massively implausible to me.

I just meant that Varga-Llosa is hot and Marquez is not, not that women don't go for illicit canoodling.

In truth, it was pure gossip.

Pappy! The whole point of gossip is that it doesn't have to be true. They are latin men and probably started the story themselves. Now I have completely lost interest in reading their work. Oh well, Viva La Machismo!

That would be El Machismo.