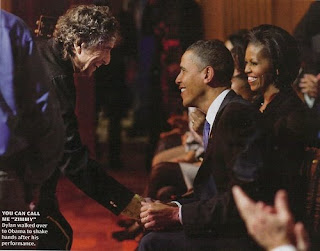 A comment in Obama's interview with Rolling Stone last week raise some new interest in, of all things, Bob Dylan's political views. Speaking of Dylan's appearance at a White House concert commemorating the civil rights movement, the POTUS said:

He didn’t want to take a picture with me; usually all the talent is dying to take a picture with me and Michelle before the show, but he didn’t show up to for that. ... Finishes the song, steps off the stage — I’m sitting right in the front row — comes up, shakes my hand, sort of tips his head, gives me just a little grin, and then leaves. And that was it — then he left. That was our only interaction with him.

Here is an article that recounts two possible explanations for this strange phenomenon -- a celeb who's not gaga for Obama, who doesn't go for O, who doesn't doff his fez for the Prez. How can we explain this?

One Dylanologist (an actual word!) says that Dylan is clearly a "racist" who "hates blacks." The evidence? He decodes the lyrics of Dylans songs, offering for instance this hermeneutical nugget:

And he says, “the pump don’t work, ’cause the vandals took the handles.” The pump, pumping money into the economy, giving blacks money, doesn’t work ‘cause the vandals, the liberals, took the handles. The ax handles, like Lester Maddox used to give out pickaxe handles in his chicken place to beat blacks so the whites can beat up blacks over the head with them. Get it?

The interviewer says "Yeah." My sentiments exactly, if by "yeah" you mean "you're insane."
Another Dylanologist avers that Dylan is simply way less leftist than people think and probably is not a fan of Obama's policies, offering as evidence Dylan's explicit statements. For instance, speaking of his political views during the hippie days in his autobiography, Dylan says: "My favorite politician was Arizona Senator Barry Goldwater ..., and there wasn't any way to explain that to anybody." Chronicles (Simon and Schuster: 2004, p. 283).
I have to vote for the second interpreter. I never much cared for the old "intentional fallacy" idea, which entails that the artist's explicit statements are irrelevant to interpreting a work of art. I once heard John Searle call it "the intentional fallacy fallacy." Right on, John!

"What's wrong with him? He didn't worship me like all the other pop stars!"

Has this guy ever heard of parsimony?

That's a good point. Occam's Razor is definitely not in this guy's medicine chest. He must have a very full, untrimmed logical beard. Huge. With critters living in it.