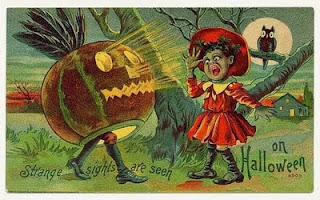 This post is a re-run. I published it last year and am inclined to repeat every word of it today. So I will:
A school near me has announced that for a Halloween even this week students are only allowed to come to school in Wisconsin-themed costumes: you know, like dairy farmer. I'm sure Ed Gein would not qualify.

To some extent, I would imagine, this is due to a desire to avoid complaints from religious nut-jobs who think Halloween is about worshiping evil. (In the world of government schooling, everyone has veto-power. Hence the bland tediousness of the product they dispense.)

I think, however, that this is also part of a wider trend, to take the fright out of Halloween. This of course destroys the whole point of it, which is to be frightening. I see this trend as in interaction between two of the most repellent aspects of our culture today: our cowardly yearning to eliminate all causes of fear and anxiety, and our sentimental, diaper-sniffing worship of children. Together they have produced many results, including the virtual extinction of chemistry sets, the near-impossibility of kids wandering off and playing without the supervision of an adult who maintains a play-date calendar, the doomed efforts of many educated Americans to turn their boys into girls, and -- over many years -- the gradual erosion of the spirit of Halloween.

The universe is a dangerous place and everything is bad for you. Even if we have a rational response to objective occasions for fear, there is still the subjective one of remaining fears themselves. Coping with fear is something we need to learn early.

The Halloween approach to fear is, not to run away from it and censor those who remind you of it, but to confront it and master it. Halloween is when kids get to be scary. A scary kid is not a scared kid. Being scary and grossing your friends out is empowering. Also, pretending to be the thing you fear tends to demystify it. Familiarity breeds not fear but contempt.

In a world where people are continually trying to manipulate you through your fears, turning fear into a game can actually be liberating. I think Halloween is good for kids and should be bigger and scarier than it already is.

(Hat tip to Uncle Eddie for the vintage postcard illustration.)
Posted by Lester Hunt at 12:25 AM

Considering the idea that the person answering the door could be a pedophile, gay spouse, terror cell member or member of a family building a mylar balloon; there is plenty to scare us!!!

I've wondered for years whether the Christmas-haters would be the ones to diss Halloween (hallowed evening). Halloween is about a very Christian idea of evil, isn't it? I thought it was the one night all the critters from hell got to run about before the good guys drove them back down? Anyway, I agree with your assessment that it's a fun and useful holiday for kids as is, and doesn't need nanny-state treatment. Here in New England, a lot of people heavily decorate their houses weeks before Halloween and they run the gambit from orange lights a la Christmas-style, to gravestones and body parts sticking out of the front lawn, big black spiders and ghosts, and little straw people. I have noticed the yuppy kids are mostly saying 'happy halloween' now instead of 'trick or treat'. I still carve a scary jack-o-lantern and light him on the front porch - the kids seem to enjoy it.

The "don't say Merry Christmas" people may overlap with the Halloween diminishers, but I think there are different motives involved. The ethics of attacking other people's holidays is interesting. Thanksgiving is publicly attacked in rain-on-your-parade ways by native Americans. Kwanzaa is probably resented by people who are unwilling to say so in public. Columbus Day of course has been completely destroyed. Its name is not even printed in the little square for Oct. 12 in the calendar published by my university. Down the memory hole!

my collegue referred to halloween as "morbid"-when I was a child halloween was not considered morbid but one of my favorite holidays. As an adult I don't see the necessity to take this away from my kids. GO HALLOWEEN, no explanation necessary

Prof. Hunt - While I take your meaning here, I think to simply dismiss some holidays as being "other people's holidays" is unfair. Thanksgiving may not be celebrated by various Americans but it's acknowledged by governments at all levels. Government offices close as do many businesses. It's offically sanctioned, so to speak, as opposed to, say, Juneteenth or Kwanzaa. I don't celebrate Juneteenth or Boxing Day but they don't cause government and business to close down. They aren't shoved down my throat and don't incur any expectations on the part of others that I celebrate it.

For some reason I don't understand what you are saying. Are you saying it's okay to ruin a holiday that you don't celebrate for reasons like the ones you mention: eg., that people keep assuming you celebrate it? That can't be what you mean.

First, in case you haven't seen this:

Sorry for being unclear. I was trying to say that it's unfair to label certain holidays as strictly belonging to other people. I'm not saying it's OK to ruin them but simply that some holidays are everyone's, in a sense. Not being Jewish, Yom Kippur is, to me, someone else's holiday. Chiang Kai-Shek Day is an official holiday in Taiwan. That's someone else's holiday. Not being a Christian, Christmas is, in one sense, someone else's holiday. But, in another sense, it isn't. My place of employment closes. Government shuts down for the day. Schools have a break centered around it (even if it now called winter break). Government buildings are decorated with things relating to it. (E.g.- an Xmas tree at the Capitol here in Madison.)

Lumping all holidays together in a relativistic way as being someone's although not necessarily yours doesn't capture how holidays are actually observed. I just felt you were very dismissive, that's all. I can certainly understand why an American Indian would take umbrage at Columbus Day.

Besides, holidays come and go. Western civilization survived the passing of Hocktide and I'm sure holidays will change even more as America becomes less white and has a smaller percentage of people with European ancestry.

Have a happy Halloween

I'd rather say I was being critical rather than "dismissive": ie., I was disapproving for a reason.

Holidays are symbols and symbolize different things to different people. To a lot of Native Americans, Columbus Day symbolizes genocide and oppression. To my Italian-American ancestors, it had nothing to do with such things. It was sort of an Italian counterpart of Saint Patrick's Day. Now, thanks to the the agitation of the first group, it's been taken off the calendar -- literally.

To deliberately ruin someone else's party for reasons like that is nasty, boorish behavior and I'm against it. Don't like Columbus Day? Then don't celebrate it.

Only government has the power to tell what is scary and not scary. Privatazation of Halloween "frights" clearly tramples on the rights of government.

I think it's a mistake for Christians to oppose Hallowe'en. By banishing its own myth of evil, they undermine the idea that God is good (& probably the idea that too much candy is bad).

Kids at Hallowe'en used to be both the scary & the scared. Nowadays, the media exploits our irrational anxieties just to keep our attention. When I was little we would call: "Shell out! Shell out! The witches are out!

BTW, when did Thanksgiving Day start coming in for the same leftist, PC opprobrium that it started levelling against Columbus Day, back in the '90s?

Funny thing, though; up here in Canada, nobody gets their knickers in a knot over Thanksgiving.

But we do have the War on Christmas, as vdare.com calls it.