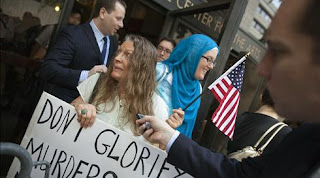 I wasn't going to say anything about the proposed ground zero mosque/community center because I don't have an opinion about it or anything to say that is not obvious, but in light of Obama's comments on Friday, I figure I ought to state the obvious.

BHO said: “ Muslims have the same right to practice their religion as anyone else in this country. That includes the right to build a place of worship and a community center on private property in lower Manhattan, in accordance with local laws and ordinances. This is America, and our commitment to religious freedom must be unshakable. The principle that people of all faiths are welcome in this country, and will not be treated differently by their government, is essential to who we are.”

My obvious comment: Whether you have a right to do something, and whether you would be morally blameless in doing it, are not only two different questions, they are almost completely independent of one another. The only connection I can see is irrelevant here: If it is morally okay for you to do it, you must have a right to do it. The opposite inference, the one that Obama seems to be employing, does not work: from the fact that you have a right to do something, it does not follow that you would be blameless in doing it. The moral pros and cons that affect action include a lot more considerations than rights, many of which have nothing to do with whether a government ought to interfere with it.

I would apply the same reasoning to all of the following:
Obviously, there are differences between all these cases as well as similarities. I'm only saying that, though, by my standards, all would be within the rights of those who, hypothetically, would be doing them, this does not settle the issue of whether they would be okay things to do. In the case of the Catholic convent near Auschwitz, an actual historical case, I am told that Pope John Paul considered the project, and then canceled it after listening to arguments from Jewish groups.

Update: To be fair, I should note that the next day BHO denied that his Friday remarks were meant as an endorsement of the proposed mosque. As to whether the new comments constitute backpedaling, or whether they actually make the very same point I am making above, I am undecided.
Posted by Lester Hunt at 12:17 PM

While not entirely apt, your mention of Auschwitz brought to mind this post by Tom Scocca.
http://www.slate.com/blogs/blogs/scocca/archive/2010/08/14/new-york-city-is-not-a-nazi-death-camp.aspx
As Scocca points out, it is not like the options were mosque or memorial grounds. The space isn't going to be left open for people to reflect on the events of 9-11. Why makes a Starbucs or Hardees a better option than a mosque?

Personally, I think this would be very good place for a mosque, if its builders really do intend it in the spirit of healing, etc. The trouble with this project for me is that not enough is known (at least, by me) about who is behind it and what their motives are. The rumors that foreign states are among the sponsors is very troubling. Some of the states that might be involved are very hostile to the American people. (Also to the American state, but I don't mind that.)

That said, I think the Scocca piece, unless I misunderstand it, is one of the worst-reasoned pieces of expository prose I have ever read in my life.

For one thing, it is offensively insulting to the opponents of the mosque, claiming they are opposed to "the right of Muslims to pray" in NYC. This is exactly the sort of fallacy I was attacking in my post. I don't agree with Palin or Krauthammer either, but this is just plain nasty.

Also, Scocca seems to think that two cases are only analogous if they are identical. NY is a city, Auschwitz was a death camp, Gettysburg has farms. So the heck what?

The way you attack an argument by analogy is to show that the cases are relevantly different. Of course they are different! -- if they were identical they would not be analogous.

Actually, his essay would be a good one for an assignment in a class in informal logic. "What is this author doing right/wrong?"

It's a case where he should have commented they way he did. All he should have said is that he understands peoples feelings about it, but we a nation ruled by laws. Therefore he wouldn't have been construed having supported it. I disagree about a mosque, church, or any other religious group setting up shop, as motives behind organized religion are quite clear. I don't know what type of "healing" any religion can provide. I, however, do think it is great it can be done and is legally permissible in the US. It make me feel good to be in the US! Can you imagine Iran allowing a catholic church to purchase (if they even allow for private property) land a mosque once stood?