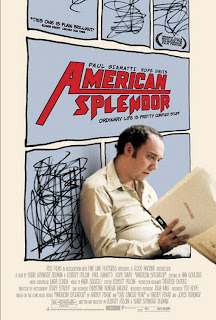 Saddened to hear of the death of Harvey Pekar, writer, raconteur, and subject of the brilliantly innovative HBO movie, American Splendor (2003), I've been watching my DVD of the movie again. Here's a thought you won't read anywhere else:

This time around, this movie strikes me as a window on a rapidly receding past. Note that the crappy job Harvey's stuck in -- and pathetically grateful to have -- doesn't even exist any more: taking care of paper files in big metal drawers and yards of metal shelves in the basement of a government hospital. Nowadays that stuff is all on computers, and the job would go to a somewhat more skilled person.

When I was a hippie, I knew longhairs who worked for the Postal Service, not because they felt a calling to wear shorts and carry bags full of Sears catalogues, but because the USPS didn't care if you had long hair. Their customers may not have liked it, but as a government bureau they didn't have to please their customers.

This is the niche in the socio-economic system that Harve occupied. The film begins with the real Harvey telling us that he has always worked at sh*t jobs, lived in sh*t places, and with women who treat him like human garbage. A lot of the charm of the film, and of Harvey's books, is enjoying the ironic tension between a) his intellectual brilliance, b) the gritty crappiness of his immediate surroundings, and c) the gross, obvious character flaws that bring about (b) in spite of (a).

Has anyone noticed the contribution to our culture that was made by that vanishing institution, the crappy government job? Here is a guy with a set of skills and interests that are not highly marketable (jazz critic, expert on comic books and the kind of blues records that only eccentric white people listen to any more) and massive failures of patience and self-discipline that prevent him from getting very far with his formal education (otherwise he might have pursued his goofy obsessions in a university and actually gotten paid for it).

How to avoid a life of utter frustration? One classic solution, admittedly imperfect, was the undemanding but unrenumerative government job (or UDURGJ for short). It enabled a person like Harve to go home at the end of the work day, his mind un-cluttered by any complex or worrying problems like the ones that come up in other people's work day, and un-exausted by any backbreaking physical labor, free to pursue his private obsessions as just that -- private. Meanwhile, the UDURGJ makes it possible for Harvey to make a real contribution to the economy and to be remunerated in a way that is appropriate to his meager contributions (ie., not much). The arrangement is meager, yes, but honorable.

From what I have read, this sort of job seems to be vanishing fast. Thanks to increasing unionization, more and more government jobs have better pay and much, much better perks than similar jobs in the private sector. (Not to mention that precious government job security!)*

Maybe you are thinking, what's wrong with Harve getting better remuneration? Wouldn't that be a good thing from his point of view? Well, I don't think so. If you take the UR out of the UDURGJ, I doubt that this job will go to someone like Harvey. If the job is really worth a lot, it will attract people who are a lot more marketable than him. Why would anyone, even the government, hire someone with Harvey's obvious emotional problems, character flaws, and complete lack of credentials, when for the same (exorbitant) price they can get someone who is a lot more bright-eyed and bushy-tailed? Those unions must be pricing guys like Harvey right out of the market.

With the disappearance of the crappy government job, we will lose a haven for dreamers, misanthopes, and misfits, for the stunted, the botched, and the mangled-by-life. I don't know about you folks, but that describes some of my favorite people. As a recovering hippie myself, I will miss them!

It's an interesting thought, that one's job should be crappy enough to leave intellectual room for the creative work that is a person's "real" calling. As a society, we've moved in a different direction: toward the belief that a person's work should have meaning to the individual as well as to the economy. Here's John Dewey back at the turn of the 20th Century:

"It is our social problem now, even more urgent than in the time of Plato, that method, purpose, understanding, shall exist in the consciousness of the one who does the work, that his activity shall have meaning to himself."

Of course, we've seen another trend recently: people's personal (private) interests becoming increasingly likely to bleed into the person's (public) vocation, and vice versa. Because of networked technologies, and the practices emerging around those technologies, the lines between work and home, public and private, are blurring in interesting ways. It seems likely that this will make it more and more challenging to find people willing to tolerate the UDURGJ.

That definitely is the ideal, that everyone does the work that is most meaningful to her or him.

My own view is that as a market society gets bigger -- both in terms of number of participants and amount of goods and services produced -- it becomes more and more likely that what any one person most wants to produce is going to be something that enough other people will want to consume (ie., pay for).

I suspect that Dewey is on a completely different wavelength: that he's thinking his Progressive friends can tweak the social system so that Harvey will find managing files about dead people meaningful, and forget his obsessions with old blues records and the like, which is so unhealthy and not beneficial to society.

Ie., Dewey is as usual half-right at most.

Anyway, thanks much for your stimulating comment. Come again!

I wouldn't want to seem to embrace utopianism, but it's worth pointing out that in Thoreau's time the producer and the consumer were drawn from much smaller pools, with vastly different tools in support of the flow of goods between these groups. Today we have people making a living by knitting only green sweaters and selling them on etsy; people who generate hundreds to thousands of dollars a month on ad revenue for a website describing how to care for your gecko; and a website (http://fiverr.com) dedicated to offering a directory of things people are willing to do for $5. This doesn't even touch about Toffler's notion of the "prosumer" or Dan Gillmor's description of consumers as what he refers to as "the former audience."

Certainly most people don't make their living selling green sweaters, and it will probably never be the case that the Harvey Pekars of the world will be able to find work that suits them perfectly. But for even the small group of people who earn some, most, or all of their money these ways, Thoreau's argument about the gap between producer and consumer must seem sort of...quaint.

You are still only talking about one of the two relevant factors: the size of the market, as opposed to the uniqueness of the individual's "genius" (as Thoreau put it). That's like giving a numerator without a denominator.

BTW, it just occurred to me that the size factor increases in boom times and decreases in bust times, such as now. That store in the mall that sold nothing by kites? It probably closed its doors in early 2009.

Yes, but that's because the overhead of running a brick and mortar business is not justified by the economy. I imagine that there's still a market for kites, except people buy them online now. If you wanted to, I bet you could start making kites that look like cornflakes, sell them on ebay, and make a small profit.

I'm not clear why market and "genius" are attached in your mind like numerator and denominator. We call Pekar a genius (and I suppose some would question that declaration) only insofar as enough people valued his work. Pekar had people who valued (and bought) his work only insofar as his ideas were interesting to someone. We only call someone a "genius" after the fact--after the market has created a demand. Sometimes that happens decades or centuries after the "genius"'s death; sometimes it happens in the "genius"'s lifetime; but it's never (or at least almost never) the case that we accept someone as a genius if there isn't a market for whatever that person has created.

Maybe "genius" is what goes on the other side of the equation, as in: person with idea / enough people who value person's idea=genius.

Maybe I shouldn't have used a technical term, but I was hoping the context would make it clear enough that in using the latin term "genius" (the corresponding Greek term is "daemon")Thoreau was referring to the unique inner nature of each person.

That is why, the argument goes, that a significant number of people may never find a major part of the meaning of their lives in their paying jobs. They will just do them for the pay, not for fulfillment.

Yyyyeah sorry, I don't buy that definition of "genius." It's a little too close to the notion of the soul for me, and therefore a little too self-congratulatory, a little too circular in its reasoning.

But then again, I love my job, so maybe I'm in Thoreau's minority.