A verdict is expected this week in the trial of Johannes Mehserle, the Bay Area Rapid Transit cop who fatally shot Oscar Grant, a young black man, in the back as he lay face down on the ground, clearly under the control of other officers.

Riots in Oakland have been predicted, if the verdict comes out the "wrong" way. Angry demonstrations were held there last week. I've got three things to say about this.

1. In a liberal democracy, holding demonstrations about a criminal trial is virtually always wrong. It's not that judges and such have "authority" that must be respected. I have no such respect for anybody. It's that a criminal trial in such a culture is a pretty good method for getting at the truth, generally far better than what I can manage by reading new stories and picking up rumors. I realize I would see this somewhat differently if I were black, but I can't imagine any of the African Americans I've known and respected waving a sign to intimidate a jury into coming to the "right" result.

2. Mehserle's story, that he meant to draw his taser and shot his gun by mistake, seems true to me. No other explanation of this horrific event makes any sense. The best alternative explanation is that he must have flown into a rage and deliberately shot him. Some people have pointed out that the young man still has one free hand, and the cops might be having some difficulty getting a cuff on it. I just don't see how this can drive someone into a murderous rage. Also notice that Mehserle raises his hands to his head after the gunshot, as if in shock and horror at what has happened. 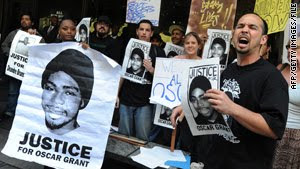 3. This is probably really a case, surely one of the worst, of a widespread problem: police over-use of tasers. Just as this is not a situation that would justify shooting someone, it isn't one that would justify tazing them either. Police often taze people for being "uncooperative," and that is most likely what was going on here. Nonetheless, Mehserle is still guilty (morally if not legally) of using excessive force. Being insufficiently cooperative does not justify a devastating electric shock. Unfortunately, current law does not seem to view the matter this way. The law for using tasers should be clarified and stricter limits laid down. If we had done so already, this tragedy might not have happened.

Later: I just came out of a camping trip in South Dakota and find that Mehserle has been convicted of involuntary manslaughter, for which he could get up to 14 years. There have been "demonstrations," but the violence has not been catastrophic. It looks like Oakland has dodged a bullet this time, unlike poor Mr. Grant. Requiescat in pace.
Posted by Lester Hunt at 7:10 AM

Incredibly sad. I wondered if the there was a regulation of where the taser could be kept on their uniform. Further, if the gun had a holster that required any step before drawing the weapon. The victim appeared to be co-operating and it clearly was manslaughter, if not murder.

They say that in most departments, for safety reasons, the taser is kept on the opposite side from the gun, and pointed in the opposite direction. That's one of the arguments that people have been given why this could not have been a mistake.

My own view is that, as unlikely as such a mistake is in any given case, in this case the alternative of intentional homicide is even less likely. (The odds are against almost everything that ever actually happens.)

I think this is a particularly egregious case of negligent homicide. In all likelihood he should do time for it.

But of course the jury by now knows a lot more about it than I do.

I have worked as a police officer in the Bay Area. This appears to be the kind of thing the crime of manslaughter was invented for; no different than if he were operating a motor vehicle negligently and killed someone as a result. A sheriff's deputy somewhere in the South Bay was recently convicted for just that, in an on-duty incident.

I will say, based on my personal experience, there is no conceivable way he meant to shoot that guy. It was an awful mistake. That would make it manslaughter.

My department never used tasers, I cannot address that aspect of it. I am willing to bet, though, that they practiced with their guns many, many times more often than the taser; thus, regardless of holster placement, the gun is more comfortable and familiar in the hand. Perils of muscle memory.

Thanks for your excellent comment. I'm glad to hear that there is, or recently was, a dept. that did not use tasers at all. It sounds, though, like you have retired from service in that department. I wonder if they have started using them since.