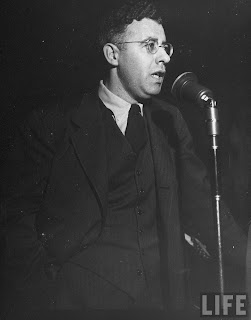 In the right-wing blogosphere there has long been a theme that says that Obama is a disciple of the old lefty, Saul Alinsky, and that he and Hillary Clinton are (literally) playing from his rulebook, an actual book called Rules for Radicals. Hillary's senior thesis at Wellesley was on Alisnky, so they say. I'm not interested in that issue. BHO's behavior won't look any worse (or better) to me depending on where he learned it. But some quotes from that book interested me.

I don't really know anything about this guy, except that leftists often mention him as as a sort of wise, lovable old coot, a sort of leftie Yoda.

I found an electronic copy of the book and read (most, I think) of a chapter titled "Tactics." My jaw dropped. The core of the chapter is thirteen tactical rules for changing the world (in good ways, supposedly). Most of them belong with the sort of tactical advice you can read in The Prince or Mein Kampf.

Yoda he is not. Look at this. (And as you read, try to imagine Martin Luther King, Jr., Malcolm X, Gandhi, or Thoreau saying any of this.)

RULE 1: "Power is not only what you have, but what the enemy thinks you have."

One thing this seems to mean, if we read it in connection with some of the rules that follow, is that his goal is to intimidate those who disagree with him, controlling them through fear, and not to convince them of something by appealing to their mind or conscience. Note also that this power seems to be based on deception of some sort.

RULE 2: "Never go outside the expertise of your people." It results in confusion, fear and retreat. Feeling secure adds to the backbone of anyone.

RULE 3: "Whenever possible, go outside the expertise of the enemy." Look for ways to increase insecurity, anxiety and uncertainty.Rule 2 is actually good advice. Base your arguments on your own experience and that of your audience. Knowing that your case is based on solid evidence increases confidence and dispels fear.  But notice that he applies this valid principle in reverse against others. Spreading this disabling fear far and wide is just what Rule 3 advises.

RULE 4: "Make the enemy live up to its own book of rules." If the rule is that every letter gets a reply, send 30,000 letters. You can kill them with this because no one can possibly obey all of their own rules.

This rule might have been defensible if it meant that you should expose hypocrisy or take advantage of the impracticality of your opponent's moral code. But that is not what he has in mind. He says that everyone is vulnerable to this tactic, not just hypocrites. And the example he gives, of answering every letter, is actually a decent and sensible rule. He is advising you to take advantage, not of your opponents' hypocrisy and foolishness, but of their decency and their ideals.  And to take advantage of the fact that they can't do something that, according to him, nobody could do anyway.

RULE 5: "Ridicule is man's most potent weapon." There is no defense. It's irrational. It's infuriating. It also works as a key pressure point to force [note his word choice here] the enemy into concessions.

I take it the idea here is something like this. Instead of engaging in a debate with Dick Cheney about the ethics of torture -- where you'll end up dealing with a mass of theories and supposed facts -- make fun of him for shooting his friend in the face on a hunting expedition.. If you do it right, people will just start to snicker when he shows up on TV. They won't hear a word he says. It will be just as though you have turned off his microphone. If you are really lucky, he will lose his temper and look even worse.

As with Rule 13, below, the basic strategy here is the respond to speech by delegitimizing the speaker. I can't think of a single practice (short of the use of threats and violence) that is more deeply inimical to the basic principles of civilized discourse.

RULE 8: "Keep the pressure on. Never let up." Keep trying new things to keep the opposition off balance. As the opposition masters one approach, hit them from the flank with something new.

In other words, disable his opponent's capacity to reason.

RULE 9: "The threat is usually more terrifying than the thing itself." Imagination and ego can dream up many more consequences than any activist.

RULE 10: The major premise of tactics is the development of operations that will maintain constant pressure on the opposition. It is this unceasing pressure that results in the reactions from the opposition that are essential for the success of the campaign.

Translation:  Provoke your opponents to doing irrational things that are not in their interest, but are in yours.

RULE 11: "If you push a negative hard enough, it will push through and become a positive." Violence from the other side can win the public to your side because the public sympathizes with the underdog.

Get them to abandon reason altogether and resort to violence. Now you are a martyr. Yay! you win!

RULE 13: Pick the target, freeze it, personalize it, and polarize it." Cut off the support network and isolate the target from sympathy. Go after people and not institutions; people hurt faster than institutions.

I think this rule is the most evil one of the lot, partly for the reason I gave under Rule 5. But there is more.

I have long been convinced that the problems in the world are due to bad institutions and not ultimately to bad people. Bad institutions reward bad behavior, punish good behavior and distort people's ideas. When bad people are at the center of things, it is generally because we have created an institution in which the only people who can flourish are ones with certain moral vices.

This truth, that "it's not the people, it's the system," was one of Marx's most distinctive ideas, and it is responsible for what is true in his doctrine.

It makes it hard to reform the world, however, because people don't get energized about "institutions," and even find them difficult to think about. The issue has to be personalized somehow.

What Alinsky is recommending is that you personalize the issue in the cheapest, most duplicitous, and cruelest way: pick out hate figures and demonize them.

If old Saul's disciples are indeed in the saddle, we are headed straight for Nastyville. I'm not going to enjoy the ride one bit.
Posted by Lester Hunt at 1:58 PM

Egads! Media Matters for America and Rush Limbaugh are both playing from the same rulebook.

Rule 5 reminds me of a comment a friend of mine made during an email conversation we were having about the torture debate -- more specifically about the wisdom of Obama's original policy of trying to "move on" (which I support and my friend doesn't). This inevitably became a discussion in which I tried to make the case that Bush administration officials were probably at least acting in good faith defense of the country, and my friend attacked that premise or said it didn't matter. I linked to what I referred to as a "thoughtful" blog post on the topic. My friend replied that it didn't seem thoughtful at all, but "more like a contrarian freshman philosphy student in a bar." He made no effort to refute any of the points made or expose any fallacies in the logic of the blog posting. After pointing out that there was perhaps much to learn from freshman philosophy students at bar, I asked him if I had missed any fallacy, since I have a harder time seeing the self-evidentness of things than he does. He then replied that our conversation was now boring him, and it was over, because "reason without sense is sterile at best." (He is a poet.) I found the exchange really infuriating, and I think it's because he stooped to the tactic of ridicule set forth in Rule #5, and openly disavowed any need to support his position with reason.

I saw Michael Smerconish, a leftie talk radio host, on TV saying that people on both the left and the right (not all of them, thank God) use these tactics -- not because they got them from ol' Saul, but "because they work!"

Nonetheless, his book seems like a good way to gain insight into the mentality behind this new culture of tactical cynicism.

BTW, not only has it recently come back into print, but the public libraries of southern Wisconsin have a wait list about nine months long for it -- and it tripled in the last two days!

That does sound right out of Alinsky's rule book. One thing I learned by dipping into his book, which I had not appreciated enough before, is that it is important not to lose one's temper in this sort of situation.

This seems just rule book of another bedroom socialist, (on how to fleece your dad and those who choose to nurture you).

RULE 1: "Power is not only what you have, but what your dad thinks you have."

RULE 2: "Never go outside the expertise of your sycophant friends."

RULE 3: "Whenever possible, go outside the expertise of you dad."

RULE 5: "Ridicule is a child's most potent weapon."

RULE 6: “A good tactic is one your friends enjoy.”

RULE 7: “A tactic that drags on too long becomes a drag.”

RULE 9: “The threat is usually more terrifying than the thing itself.”

RULE 10: “If you push a negative hard enough, it will push through and become a positive.”

RULE 11: “The price of a successful attack is a constructive alternative.”

RULE 12: Pick the target, freeze it, personalize it, and polarize it.”

If he was single-parented he would have hung himself in a demonstration gone wrong when his Thunder Bird 2 was take from him and told to go to sleep.