The Revolution We Need is a Copernican Revolution 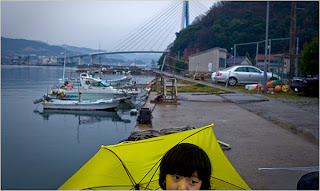 The only tough question Obama got in last night's press conference had to do with his claims that, if we do not enact his massive program to spend our way back to prosperity, the current depression will become "irreversible": isn't he undermining his credibility, asked the only real journalist in the room, with this dire rhetoric? Obama answered that if we don't do what he says, we will slide into a situation like Japan in the nineties, its "lost decade."

As you can see in this front page article in the New York Times, Japan is very far from being a good argument for the Obama plan. (Hat-tip to Nick Gillespie at Hit & Run.) Apparently, Japan was pushed into its lost decade by a "stimulus" plan that bears frightening resemblance to that of Obama and friends:

Japan’s rural areas have been paved over and filled in with roads, dams and other big infrastructure projects, the legacy of trillions of dollars spent to lift the economy from a severe downturn caused by the bursting of a real estate bubble in the late 1980s. During those nearly two decades, Japan accumulated the largest public debt in the developed world — totaling 180 percent of its $5.5 trillion economy — while failing to generate a convincing recovery. ... Among ordinary Japanese, the spending is widely disparaged for having turned the nation into a public-works-based welfare state and making regional economies dependent on Tokyo for jobs. ... In the end, say economists, it was not public works but an expensive cleanup of the debt-ridden banking system, combined with growing exports to China and the United States, that brought a close to Japan’s Lost Decade. This has led many to conclude that spending did little more than sink Japan deeply into debt, leaving an enormous tax burden for future generations.

Another frightening little factoid from this article: Treasury Secretary Geithner thinks the reason the Japanese stimulus plan didn't work was that it didn't go nearly far enough. This means that he is also predicting that the Obama plan, which is much smaller, will not work either.*

As far as I know, Keynesean attempts to spend a country into prosperity have never worked. (Go here to see Robert J. Samuelson talking about one of the Keyneseans' most spectacular and horrific failures.) But the Keyneseans always have some post-hoc explanation for their bellyflops. Either they didn't spend enough, or they spent it on the wrong things, or gave the money to the wrong people, or the Arabs screwed things up by shutting off our petroleum supply, or it actually did work but then another recession set in for no apparent reason, or ...

Obviously, these people will never run out of excuses. Keyneseanism is starting to look like the old Ptolemaic astronomical theory. It frequently failed to predict the motions of the planets, but its proponents would just add another epicycle to the model and it worked again -- until the next time it didn't.

There are all kinds of reasons why humans sometimes show this seemingly psychotic imperviousness to facts and experience. Often, religion is involved -- as it was with the Christian partisans of the Ptolemaic system.

In this case, what is involved I think is politics. As it says in the above NYT article, the ruling Liberal Democratic Party of Japan has pursued these ruinous policies in order to stay in power -- and it has worked. One thing these packages do stimulate is voting. The workers who built the "bridge to nowhere" in the above NYT photo (note there is no traffic on it -- click to enlarge) were very pleased with the money they were payed for doing so. Of course, as taxpayers, they also had to pay for it, but they got to share these costs with all the other taxpayers, while its benefits were focused on them. Thus these "public sector" projects are actually private goods, and those who vote against them and in favor of the "private sector" are actually providing a public good. That is why people have a strong motive to vote for such spending and a weak one to vote against it. The result is more and more votes for bigger and bigger spending, and plenty of people with an interest in developing theories to justify it.

The Copernican revolution was long delayed by the fact that those who opposed the increasingly complex and counter-intuitive Ptolemaic theory were also going against the Church. Those who speak for simple economic sense today are going against the Church of the State.
__________________________________________
* Speaking of fright, I just noticed what investors think of Obama's press conference: gold soared and stocks plunged to October Crash levels. Well, maybe it was a coincidence. It could be because the Senate today passed a version of the package that would cost about $20 billion more than the one passed by the House last week. Added later: At the end of the day, I realize the market meltdown was caused by Tim Geithner's bailout briefing. I forgot to watch it, but I hear it was literally laughable.
Posted by Lester Hunt at 12:06 PM

What a softball laden news conference? I can not believe that no one asked about the CBO's conclusion that the stimulus will actually hurt GDP in the long run. Also, a ms. hunt as this question, "And, also, do you know of any country in the Middle East that has nuclear weapons?" And of course, per usual the messiah's answer was vague and unsubstantive. He said something about not wanting to speculate and that he doesnt want a nuclear arms race in as volatile a region as the middle east. Why would he need to speculate? Our intelligence is not good enough to determine who has nukes in the middle east? The answer is that most people believe israel has them although they have not admitted as much. what a world!

I happen to have transcripts of all of JFK's presidential press conferences. It will be interesting, if I can find the time, to compare the sorts of questions he got to the ones Dear Leader gets. I'd bet real money that there is a significant difference. I think what we are seeing here is not normal media bias (which after all has to be subtele) but something else entirely.

You lauded Ireland as a capitalist success but what about all the money they got from the EU to get things going there including infrastructure?

"Yet Ireland has benefited perhaps more than any other country from EU handouts – a net gain of £32 billion at the last count – which have helped transform it from one of the poorest countries in the EEC in 1973, when it joined, to the second richest per capita."

Billions were poured into Ireland's infrastructure:

I read in yesterday's WSJ (opinion section) that Obama pre-selects the journalists (maybe just at the White House press room?) that will be allowed to ask questions. Surely he cannot control the entire media out there to this extent? He wants to run the 2010 census from inside the White House and he has apparently quadrupoled the number of staff who actually work in the west wing. Imperial Presidency in the making.