Penn Gilette (aka the greatest living political philosopher after the death of Nozick) has a heartfelt comment on this video:

I think he has noted one major Dimension of Creepiness in this video. Whatzizname from the Red Hot Chili Peppers pledges, while kissing himself, to be of service to the Leader. Then, at the end, Demi Moore pledges "to be a servant to our President." That is indeed seriously creepy. But I noticed another Eeeeewww Factor, one that is closely related to this one.

What I noticed was the shot at the end, in which all these big-government-liberal celebrities, speaking in unison as cells in a big chessboard matrix, shrink and shrink until they finally become cells in the body of the Great Obama. (In case you can't bear to listen to all of this treacle-soggy bunk, fast forward to 3:45.) Every philosophy major will instantly recognize this as the title page of Hobbes' great defense of authoritarianism, in which Leviathan (the state) is represented as composed of the bodies of countless little people (click to enlarge): 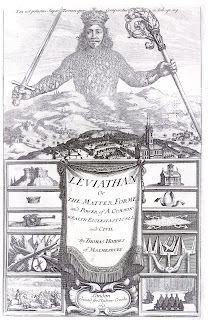 What is all this supposed to mean, if anything? We do know what Hobbes meant. He thought that if we insist on using our individual moral judgments as to matters of justice, we are doomed to live through vicious religious wars, like the English Civil War, which was raging as he wrote his book. If you value your life, you must hand your brain over to the state. You might call this the Authoritarianism of Fear. That is clearly not what is going on in the Obama video.

Maybe what is going on there is the Authoritarianism, not of Fear, but of Cowardice -- because these pretty people are welcoming subjection and servility (which Hobbes thought was merely necessary and inescapable) as positively good. Maybe the idea is that as cells in the body of "that Mortall God, to which wee owe ... our peace and defence" they enrich their lives with meaning and transcendence by being absorbed into something greater than themselves.

The Latin quote on Hobbes' title page means "there is no power on Earth like Him." In the Bible this refers of course to the Creator of the Universe, but Hobbes is applying it to the state. He has a point there. It is easy to view states and state leaders in terms that are basically religious. That in fact is probably the normal way of viewing them. But the orthodox wisely regard it as a sin nonetheless. It's called idolatry.

P. S.: Did Penn actually say "all my friends are blowing him"? I might have mis-heard that.
Posted by Lester Hunt at 11:36 PM

Yes, that is creepy. I was surprised they went as far as to say "be a servant to" as opposed to "be of service to" (which is also creepy, but not quite as much). Isn't he supposed to be serving our interests? Penn's point about how unbelievable this would have sounded in a George Bush ad is right on.

I literally recoiled in terror at the end of that video. Good catch on the Leviathan connection! I immediately thought of The Wave; "Strength through discipline! Strength through community! Strength through action!" I hate to scream "Socialism!", but when I see a sea of faces pledging themselves in unison to the State, well...

Is this what they mean by a unitary executive? Since 'We are One', I guess that means we'll have to reopen some offshore detention facilities for the enemy combatants (lawful, unlawful, it's all the same, absent habeas corpus).

After all, we ARE us & if you're not with us, you're against us.

I've heard Loren Lomasky and a few other guys hold that Hobbes is greatly misunderstood: given that the State will attempt to assert its rights against you, if you can survive in spite of that, you're allowed to. After all, like Mill's take on war, there are worse things than poor, nasty, brutish and short. Works for me, except I'm tall.

OTOH there's no misunderstanding that H'wd brigade, is there. It's like a smiley-faced Two Mintues' Hate.

Comatus, Are you referring to Hobbes' belief that you always have a right to shot back when your own government tries to kill you(even if you are a murderer and they try to execute you)? I don't derive much comfort from that.

Yes, maybe it is merely a right to duck or run away -- I haven't checked the text -- but in any event it coexists (on Hobbes' view) with their right to kill you, so it doesn't really have much value, if any.