Do People Become More Conservative as They Age? 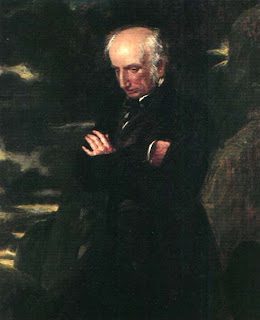 Well, duh. No, I'm not going to oppose the conventional wisdom on this. In some sense, the answer has got to be "yes." But I've been thinking about David Mamet's turn, and an interesting little article in the the UK's Independent about famous right-faces (here you see William Wordsworth, grandaddy of them all), and I'm wondering what this phenomenon really amounts to.

I keep coming back to a little book by Thomas Sowell, A Conflict of Visions. Of all the things I 've ever read, it comes closest to making conservatism sound like an intellectually coherent position.

Sowell speaks of two different visions of human life: the unconstrained (or Utopian) and the constrained (which he calls the Tragic).

The naturally constrained vision would go something like this: It might be nice if everyone could live in mutual love and caring, like one huge nuclear family, but human nature does not allow it. People really care about themselves and a very small group of family, friends, and colleagues (ie., they are "narrow," "selfish," "sinful"). Also, there are insurmountable practical problems (insufficient knowledge, coordination problems, etc.) involved in achieving the Giant Happy Family concept.

The morally constrained vision would be something like this: It might be nice to force people to serve the Giant Happy Family, but you would be violating their rights to do so. Without your leadership, people will devote their lives to narrow, petty pursuits, but they have a perfect right to do so. Their lives are theirs, not yours, to dispose of. Maybe you would spend their money on the Greater Good, and they will just spend it on themselves and their families, but that's tough. It's their money and you can't have it.

Maybe what happens as you get older is you come to appreciate constraints more. You stumble over those natural constraints. You see Utopian dreams turn into Stalinist nightmares. You see moral constraints enabling hopelessly diverse people to get along peacefully. And maybe, as Mamet suggests, you also find that the constrained system really doesn't work out so badly after all.
_________________________________________
Added later: I just found an article that describes a study that supposedly shows that people become more liberal, not more conservative, as they get older. You will find it here. Before you figure they must be right, notice that among the synonyms for "conservative" these people use is "rigid," "stuck in their ways of thinking" "not open to new information." They also seem to use racial prejudice as an index of conservatism. Wow. How many different things are wrong with that? Would you trust these guys to do a careful, unbiased study of ... anything?

Added still later: Jonah Goldberg has found more examples of this if-you-are-not-a-left-liberal-like-me-you-must-be-narrow-minded phenomenon. Given that this attitude, in itself, is a transparently obvious example of narrow-mindedness, I find it actually pretty funny. To paraphrase Saint Oscar, you'd have to have heart of stone not to laugh at it.
Posted by Lester Hunt at 10:54 AM

But if government is, in the first place a means of banding people together towards some greater goal (i.e.: mutual protection, "protection" having become a looser word as history progresses) then why not fulfill that impetus in the forms it takes? why not provide the welfare that events and circumstances have made a necessity for people, etc.? having government in the first place seems to initialize this move towards "happy family" society, coercion is possible but by no means a necessity. Many European countries now have in terms of rights what many in the 19th and 18th centuries would have seen as only possible under some dictatorial authority. The market and society tends to adjust, as education begins more and more to convince even lower class people that they are, in fact, people and not born servants, born cogs, agitation for rights increases. Why because these people live under governments who at least feign benevolent for-the-people-by-the-people philosophy. If this should not be the case, then you have tyranny of the rich, church, or whomever, or a flat society of Tolstoyan communes wherein little happy families interact peacably with other little happy families (which strikes me, much as I wish it not so, as quixotic).

"...why not provide the welfare that events and circumstances have made a necessity for people.." The morally constrained answer is: that money isn't "provided," it's taken away from others. ... You seem to think that we have no alternative but to choose between forms of intrusive power. Either we take the nice intrusiveness of a European welfare state or we get some nastier form of tyranny. You are leaving out a third alternative. Do we really need masters at all?

well, that complete lack I mentioned, BUT welfare is not taking away from others in anything but a myopic sense. For one to be rich amidst a society in the first place one must take from others. Taxes via the state or convincing people to buy shit they don't need, it's taking. There are plenty of other non-commercial means of becoming rich too, but they all involve slighting other people involved, giving one's self millions while the lowest rung works as many hours for pennies. I'm not sure how one can steal what has already been stolen.

So selling people things they "don't need" is taking, but taxation is not. Sorry, I don't buy that. The former is a voluntary exchange, the latter is at gunpoint.

I'm a little puzzled by your labeling of the natural/moral constraint divide. I lean towards consequentialism in my theoretical sympathies, but very much accept the idea of practical constraints. Yet my views on social issues are what is called liberal: abortion should be mostly or entirely legal, at least some currently illegal drugs legal, same-sex relationships having exactly the same legal status as opposite-sex ones, etc. The debate is, at bottom, semantic, but I still find the use of terms odd.

I said they're both taking:

"Taxes via the state or convincing people to buy shit they don't need, it's taking."

Whether it's voluntary or not is up to psychologists to decide (for the whole point of advertising is obviously to create a sense of necessity), but taxes themselves are at gun point only for those who don't own the government, and those who own the government run it (as John Jay said they ought to), wield it and are not necessarily subject to it. That's why taxes on the rich have dropped so dramatically in the last century (from 70% to 28% for the top personal tax bracket under Reagan alone). Since we already have this a flouting of the original principle of mutual protection, the (tacit) loosening of rules for those at top, I'm not sure how less government intervention (in the form of welfare, upperclass taxes, regulations, etc.) hurts. If anything it hews far closer to that fundamental contract than a government which works only to undergird its aristocracy.

Anon, I was responding to your saying "convincing people to buy shit they don't need, it's taking," while on the other hand "welfare is not taking away from others in anything but a myopic sense." Which I took to mean that people who sell me things that you don't think I need must be forcing them on me, while the the welfare state somehow collects its money non-coercively.

>All the political positions you name are examples of a morally constrained state.

Or a belief that there just isn't any purpose served by the government acting in those ways.

As we grow older we lose our "piss and vinegar" and crave safety and comfort the same as we did from our mothers as children; so we learn to appreciate our gov't even if she was a bit tough on us.

Another baby boomer headed for medicare and social security.

"The former is a voluntary exchange, the latter is at gunpoint."

It's a voluntary exchange on the market for nation-state residency or citizenship. Membership has its benefits and its costs. There are plenty of "substitutes" for American citizenship, and in any case, enterprising libertarians are free always create their own startup. (Steep barriers to entry, though!)

Q, The idea seems to be that I am consenting to whatever the government chooses to do to me, simply by virtue of not selling my house, leaving my friends and associates, and moving elsewhere to deal with another government (or moving to a desert island). I think this argument proves too much. It would mean that the Jews who didn't leave Nazi Germany when they could were consenting to the Nuremberg Laws, which therefore were not coercive. It would mean that, before Roe v. Wade, American women were consenting to not being allowed abortions by virtue of their not having moved to Denmanrk. Etc.

Lester, two things in response. First, at least to the extent that libertarianism arguments commend truly laissez-faire capitalism, I'd argue they too prove too much, in much the same way.

Second (and somewhat related), the Nazi Reich clearly breached Germany's citizenship contracts with Jews (and other "Unerwünschten"),* in a particularly heinous way. The legal remedy for this breach was partially imposed at Nürnberg. The result was far short of complete justice, of course, but then (at least arguably) we couldn't reasonably have expected more without better international regulation.

__________
*NOTE: If Walmart were to detain its Jewish customers for the day and force them to stock the shelves, the implied agreement that subtends the term 'customer' would be void; the fact that Walmart were doing so in an otherwise "free market economy" would be of little avail to those detained. (Yes, in a "free market" economy, Walmart has financial, reputational and legal incentives not to engage in such action. But then so did Nazi Germany. Alas, there's no accounting for the sociopath.)