What Made Him Tick 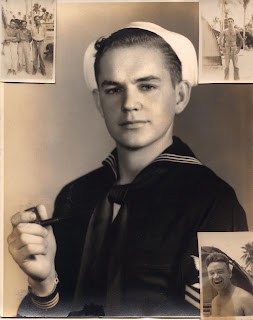 I thought I should post something about my father that was written by someone who, unlike me, did not have any sort of love-hate relationship with him. I do have some sympathy with the old idea of de mortuis nil nisi bonum. My sister sent me a column by Chris Smith in the Santa Rosa Press Democrat (Thursday Jan. 31) [thanks, Loreen!], which had this to say:

WHAT MADE HIM TICK: It's taking time for the sad news to reach all the customers of David Hunt, the lifelong watch and clock repairman who kept an endangered trade alive in a museumlike workshop in his back yard.

I, too, just heard that Hunt died early last month while working, naturally, on a clock.

Though he was 84, "he still worked for to six hours a day," said his daughter, Loreen Hunt of Santa Rosa. People far and wide knew Hunt what the man to go to if granddad's fine old Waterbury mantle clock froze up and nobody else would look at it.

Hunt worked as a watchmaker in L. A. for about 20 years [actually, that was Stockton -- he was born in L. A.] before he moved to Santa Rosa in 1963 and hired on at the Gensler Lee Diamonds store on Fourth Street.

He went independent and began repairing watches and clocks in his home workshop a long time ago, in 1971. A visitor could easily lose himself while examining and admiring Hunt's vast assembly of handmade precision tools and all manner of timepieces and pieces thereof.

Sometimes Hunt find himself one finger short of being able to perform an intricate procedure and would ask any customer present to hold this or press here.

The watchmaker was an introvert, as you might expect. He cherished also the quiet pursuits of gardening and reading history. He was proud to have served his country in the Pacific toward the end of World War II.

He was a craftsman, not a one-day-service sort of guy. His grateful customers knew he might keep the clock or watch for weeks, but they didn't mind. [Weeks? Try months. Or maybe years. "I'm waiting for a part," was what his customers were often told.]

They knew Dave Hunt was a friend of time.

In 1860, Chauncey Jerome, one of the great pioneers of the American clock industry in the Connecticut River Valley, published a History of the American Clock Business for the Past Sixty Years and Life of Chauncey Jerome, Written by Himself. It is a wonderful historical document, telling the story of an important part of the Heroic Age (as I think of it) of American capitalism. The last lines of the book could be an epitaph for my father: "The ticking of a clock is music to me, and although many of my experiences as a business man have been trying and bitter, I have the satisfaction of knowing that I have lived the life of an honest man, and have been of some use to my fellow men."
______________________________________
Above on the left is a portrait made while Dad was stationed in Norfolk, Virginia. The insets are pictures of his old Navy buddies in the Philippines. Dad himself in on the right end of the picture at the upper left (click to enlarge). In the lower right is the man I was named after, Lester Henry, later the owner of a lumber yard in Lake Geneva, Wisconsin. Pictures of Dad from this period often show him holding a pipe. (To make him look older? God he looks young!) On the right is a picture he took of me and my younger brother, Al, one Christmas morning long ago, 1958 or 59.
Posted by Lester Hunt at 11:44 AM