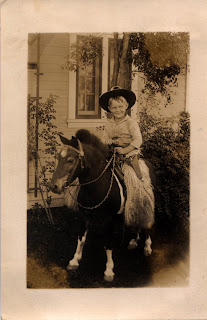 When a loved one dies, you get all sorts of weird stuff. I just became the owner of my father's entire collection of bow ties. But what for? I wear ties all the time, that's true, but only cravats.

I also got a couple of bags of photographs.

There is a theory that seeing a photograph of a thing is an indirect way of seeing that thing. Just as I can see you by seeing an image of you in a mirror, so I can see you by seeing a photo of you. The photo image of you is formed by light rays landing on the the film, and then my retinal image is formed in more or less the same mechanical way. Just one more falling domino in the chain of causation.

So looking at a photo is completely different from looking at a painting. With a painting, I am decoding the painter's interpretation of the subject of the picture. Every painting is a comment. A photo doesn't comment. It exhibits. Dziga Vertov said that photos are time-telescopes.

I don't think I buy this as a general ontological theory of photographs, as a theory that is about the real relations between real objects, but it sure gets something right about the phenomenology of viewing photos -- about what it is like to view a photo. Every photograph is like a transparent window into a lost world.

The sepia print above (click to enlarge) is picture of dad in the inconceivably remote world of his childhood. Those 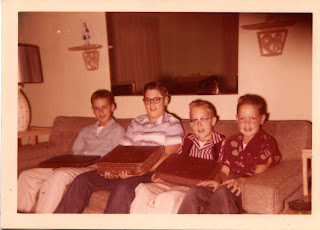 wooly chaps! That pony's frightwig mane! And how did they ever afford to put him on a pony? This must have been before his father died, leaving the family of ten almost destitute.

To the right is a telescopic view into my own past. From left to right: My buddy Gerald Campbell, my oldest and best buddy Ricky Brazeau, me, my brother Al. My God, I'd forgotten that Gerald was so beautiful. Well, we were all awful cute. But kids don't notice junk like that. That's another aspect of the phenomenology of the time-telescope. You see the past, but you see it in the present. If its a picture of your past, this can make for revelations. You aren't the same person you were then. Seeing a photo of your own past involves a sort of double vision, it brings it back, but it also makes it different. 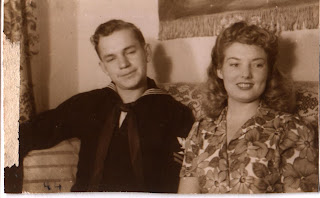 The other sort of photograph, the one that is not a window into your past, is the remote world photo. On the back of this sepia print, in Dad's unmistakable block printing: Dottie + myself/taken in May 1944/Inglewood, California. (This was before he met my mother.) Who was Dottie Dimples? I don't think she was ever mentioned in our house. Did he get as lucky that night as he obviously thought he would? Is she dead too? When I showed this to my brother and sister, they both said "Eeeew!" But it's one of my favorite pictures of Dad. Most people don't like thinking of their parents as sexual beings. [Here insert obvious comment about how if they weren't, you wouldn't exist.]

Speaking of which, here is Dad at the downstairs workbench at Gensler-Lee Jewelers, on Main 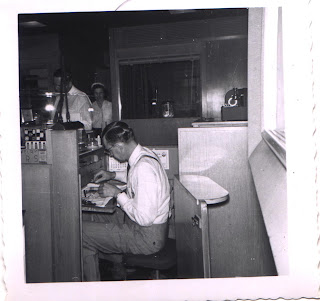 Street in Stockton California, circa 1959. He's so young! And thin! And that patent-leather hair! At the time, he was having an affair with the woman you see smiling at him from the rear doorway. Mom never suspected a thing. I know because her talk was often a flood of complaints, threats, and verbal abuse, and she never complained about this. Odd that with all her complaining she never noticed the one worst thing he did. People are certainly odd, aren't they? It's like Nietzsche said, man is the insane animal. 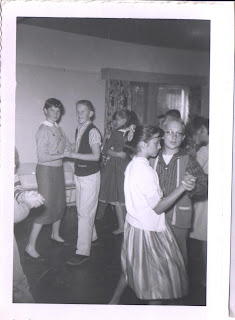 Here is another double vision one. A ninth grade dance, with a girl named Melanie. At the far left is Page, who is now a professor of literature at the University of California. (I believe she is still on the extreme left, come to think of it.) Melanie doesn't look as glad to be with me as Gerald and Ricky do. Sigh. She sure was pretty. Now that I did notice.

Okay, one more time-telescope. Here we are, about to begin a bicycle trip from our home in Stockton to the old gold rush town (almost a ghost town) of Jenny Lind, on the banks of the Calaveras River, a distance of 29 miles. 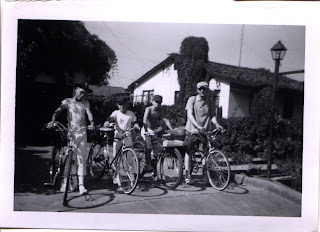 It was the adventure of a lifetime, so far. Ah youth! Ah mortality! Ortega y Gasset defined nostalgia as "the feeling of missing the nearness of the distant, ... a sorrow at being where one is not." It has the same double minded, two places at once phenomenology as the photograph. For us, photos and nostalgia are inseparable. Photos are the nostalgia-junkie's hard stuff. With photos, you can mainline that aching sense of there and not-there.

Humans have only recently acquired this sort of access to the past. Before Louis Dagerre (1787-1851) people could only remember the dead with relics, like the bow ties. Or, if you were wealthy, you had a painting, maybe a miniature, showing what the person looked like to the artist (if the artist was skilled enough to convey even that). Now we have raw, uninterpreted pastness, bags and boxes of it, enough to haunt you with ghosts, enough to shatter your preconceptions, to make you laugh, to make you cry.
Posted by Lester Hunt at 10:23 AM