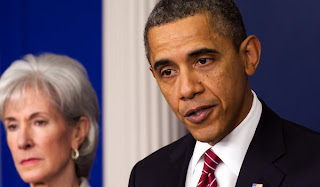 Forcing someone to actively participate in an activity that they sincerely believe is wrong is morally problematic. So is forcing them to pay for advocacy of the idea that this activity is in fact not wrong (the case that Jefferson is addressing here). I would also put forcing someone to pay for carrying out this same activity belongs in the same category.
Posted by Lester Hunt at 1:46 AM

I see what you're saying, but kind of disagree. The idea that making something they don't believe in is wrong is noble, but impractical. The Christian right is paying to teach sex ed in public schools, as well as evolution.

Church of Jesus Christ, Scientist memmbers are forced to pay for insurance for people to go see doctors they don't believe in.

There is a difference between providing a service (contraceptives) and advocating for that service or an associated practice. It is not like they are asking Bishops to go door to door promoting contraceptive use and pre-marital sex here.

You've just given one of the reasons I am opposed to government (ie., "public") education. Government education means endless quarrels which can never be resolved because all the parties feel they are in the right -- because they all are in the right! Why should an atheist like me be forced to pay for schooling in which "intelligent design" is taught as a scientific theory? Why should a fundamentalist be forced to pay for the teaching of evolution as truth? Between us, there is no possibility of compromise, as long as we are trapped in a coercive system in which one of us wins and the other must lose.