Moral Thinking in the Real World 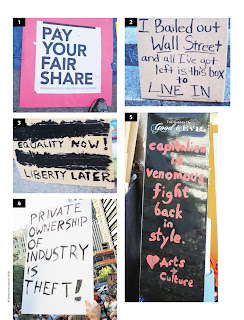 This is a very interesting article on the OWS movement by the psychologist Jonathan Haidt.
I've been following his work at a distance for some years now. He and his colleagues analyse real-world moral thinking based on "six clusters of moral concerns": "care/harm [eg., compassion for the underdog], fairness/cheating [here, distributive justice has a place], liberty/oppression, loyalty/betrayal, authority/subversion, and sanctity/degradation."
Among their findings: liberals and libertarians think almost exclusively in terms of the first three clusters. Social conservatives use all six, extensively. We liberals and libertarians, by comparison, live in a morally truncated world. At a fundamental conceptual level, their moral world is much richer.
The signs at Zucotti park, he finds, are extremely typical of the left-liberal Weltanschauung.
The most interesting thing in this particular article is the Machiavellian advice he offers OWS at the end:

[I]f the protesters continue to focus on the gross inequality of outcomes in America, they will get nowhere. There is no equality foundation. Fairness means proportionality, and if Americans generally think that the rich got rich by working harder or by providing goods and services that were valued in a free market, they won’t support redistributionist policies. But if the OWS protesters can better articulate their case that “the 1 percent” got its riches by cheating, rather than by providing something valuable, or that “the 1 percent” abuses its power and oppresses “the 99 percent,” then Occupy Wall Street will find itself standing on a very secure pair of moral foundations.

When I read this I realized that, by George, equality is not to be found in his six "clusters." What you see is fairness, which (pace Rawls) is not the same thing. Haidt thinks of fairness as a matter of proportionality, not equality. Equality means treating everyone the same. Proportionality means treating people in appropriately different ways.
Then another realization hit me: if he is right, academic political philosophy is even more out of touch with the way normal people think than I had thought it was. Whether you look at Arneson or Cohen or Dworkin - or the vast horde of Rawlsians - it is pretty much wall-to-wall egalitarian. Their big issue is: which kind of eqalitarianism is the right one? The one thing they assume is the fundamental moral foundation for political thinking is something that most Americans, and possibly most human beings, don't really care about at all.
Posted by Lester Hunt at 3:06 PM

I'm not a fan of Rawls, but it's not as if he advocates mandating that everyone . (The "egalitarian" label may be misleading here. )What does he advocate is that the way society is organized do two things: first, guarantee basic liberties for all, and second, maximize the well-being of the least well-off. That sounds like cranking concern for care/harm and liberty/oppression way up, especially with your "underdog" gloss on care/harm.

I'd say that Rawls treats the eqalitarian standard in an unusual and original way, but it still is his ultimate value. Notice that the Principle of Equal Basic Liberties treats issues like freedom of speech as issues of distributive justice, and that the DJ principle employed (as the name of the principle itself suggests) is equality. Also, when he argues that the difference principle is what would arise in the original position, he claims that the first arrangement that would occur to the participants is absolute equality. Then, inequalities are allowed but only if they are good for the least well-off -- which is an egalitarian concern. Note also that it doesn't matter whether the least well-off are suffering any positive pain or harm at all -- only that their position is less than that of others. So the ultimate value at work here can't be care/harm.

Like I say, though, his position is complicated, which makes it seem initially multi-vauled and ambiguous.

I don't know what "equality" is. If somebody says: "equal protection under the law", I have an idea what is meant by that. But the term "equality" by itself is so indistinct and abstract that it only makes any sense if you give or imply a context. I think that OWS protestors project their utopian vision for mankind onto that word. That is a priority for them, and they do not seem to examine the origin of the word, to see whether such a thing as "equality" exists anywhere in this universe, or how such an abstraction is created and to what extent it may be valid, and at what point it crosses over to become a tool for ideological projection. They have confiscated the word "equality" for their purposes, just like the word "Islamophobia" (and many other words that are similarly coined or confiscated). "Equality", as an unexamined, absract concept, does not go together with "freedom", because the premise of "equality" is the (false) belief that everybody is "the same" in every important way. The idea that you can have freedom but NOT have different outcomes sounds crazy to me. I agree with an article titled: "Occupy Wall Street: a Declaration of Dependence" http://townhall.com/columnists/michaelprell/2011/11/10/occupy_wall_street_a_declaration_of_dependence/page/full/

What they are thinking is that wealth and income should not be "too unequal." My own view is that there's no such thing as "too unequal," any more than we could be "not unequal enough." Whether you are entitled to what you have depends on how you got it. I'm with Heidt on that.

Lester Hunt said: What they are thinking is that wealth and income should not be "too unequal."

Okay. I think I understand what that means (or at least I try to get into the mindset for a moment). Now: somebody should go and tell the OWS protestors about the concert pianist crisis in this country: the distribution of concert pianists is unfair; there should be FULL EQUALITY in concert pianist distribution: everybody should be able to become one if they want. That's how absurd this talk of "income equality" sounds to me. One of the supporting fallacies is that life is fair, or can be made fair. But it's not and cannot. Almost nobody can make a living as a concert pianist, that's not fair, either. But if somebody comes along with that kind of talent AND also has all the other qualities, then he should get a chance. I suppose the OWS protestors would then protest at his concerts, demanding that the government confiscate half his earnings, to give to the less successful pianists.