Signs at the Wisconsin Union Protests

Deborah, my better half, went to the protest in Madison yesterday and collected some pictures of signs there. Everyone was quite nice about letting her photograph them. I hope they won't mind my putting them here! (All pictures have been cropped so as not to show faces.) 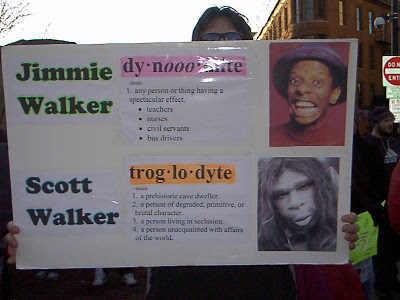 Some of them were rather complicated and hard to follow. It seems to me that Tea Party signs are generally more pithy. (Click to enlarge.) 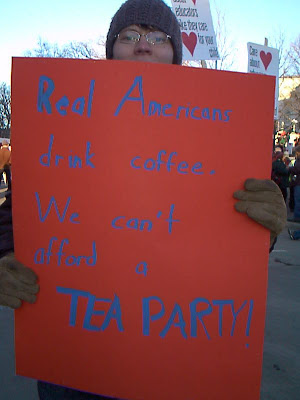 Relevance to the collective bargaining issue was not always immediately apparent. 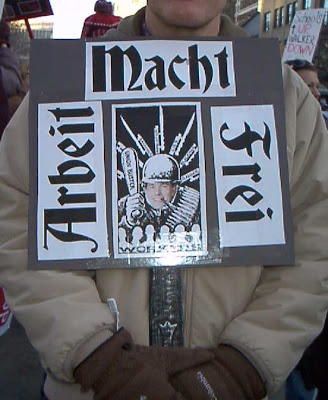 A number of signs compared Gov. Walker to Hitler. This gentleman, to his credit, was thoughtful enough to ask Deborah, "Is this offensive?" "Very," she said, "I'm Jewish." He replied, "I'm sorry." The apology seemed to be sincere.

I have to say, also, that this one is more literate than the average Hitler comparison. 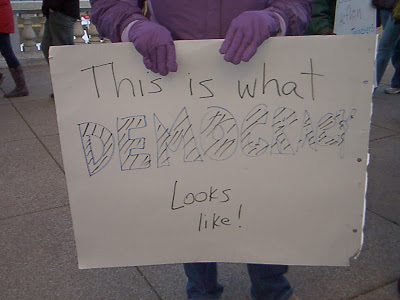 I think democracy looks more like that election in November that you people lost. 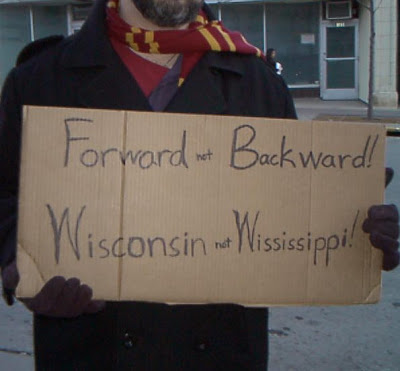 This one is pretty obscure, at least to me. Is Mississippi one of the 26 states that do not allow collective bargaining by government workers? Is that what this sign is about? 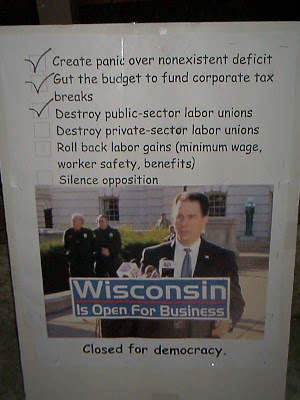 The taxpayers will be so glad to hear that the deficit does not exist! (In case you are wondering what the heck this is about, see this article. Hat-tip to economist Steve Horwitz.)

That was fun. Thanks Deborah!
Posted by Lester Hunt at 7:38 PM

Wow, that article you included is pretty incredible. Especially the part where Maddow blamed Walker and republicans of the past on whatever deficit there might be ... despite there being "$200 million owed to the state’s patient compensation fund, a debt courts have declared resulted from an illegal raid on the fund under former Gov. Jim Doyle."

I wish I had taken pictures of the anti-protesters at the Sunday march on the Capitol. There were about 60 of us and we started chanting, "Fair and balanced" in response to several signs that said, "Fox lies!" I've been glued to Fox news and so far they haven't reported anything about us anti-protesters.

I went to the Tea Party rally on Saturday while this was going on:

Several thousand other Tea Party folks separated me from the speakers, so I didn't actually see this go down. At any rate, this is situation is pretty asymmetrical - the union people don't have any stories of us trying to mess with their equipment!

Thanks for the video link, Max. I had not heard of this incident. At least the police did their job and intervened!

Your wife cherry-picks stupid protest signs almost as well as the pros do over at Fox News. I hope you don't think those signs offer an accurate portrayal of the capitol protests as a whole...if so, maybe you should take a walk over there at some point.

Anyway, I've read many articles about how Wisco unions have agreed to the financial aspects of the bill. I would imagine most of the reasonable protesters who aren't out in the streets holding signs with words like "Hitler", "Mubarak", or "Egypt," are willing to accept (though they may not LOVE) these aspects as well.

As someone who seems to agree with Walker's bill, what do you think the reasoning is behind ending collective bargaining? That is the biggest issue on the table (the one that people should be talking about) and it's something you haven't addressed. Enlighten me.

You are right, the collective bargaining issue is the real one. Please take a look at my earlier post, "Public Service Employee Unions are Different." It's a little further down the page from this one.

I would like to defend my choice of photos. First of all, I spent hours up at the Capitol, on side streets, and outside restaurants and stores. My purpose was to take pictures of these particular signs precisely because no news station or journalist was reporting on them. I did not take pictures of signs depicting Gov. Walker as Hitler and Mubarak -- because others had shown these. I could have taken photos of the more moderate signs -- on both sides (I say "both" but actually there were lots of different points of views). I actually have a lot of sympathy for the teachers -- I am a former teacher -- and know many of them work under very difficult circumstances.

Perhaps I should point out that the comment immediately above was written by Deborah (logged in as me), not by me.

Collective bargaining for state employees is still worth while to have.

We need the check on gov't that public sector unions provide. The people in these state unions - teachers, especially - help make Wisconsin such a great place to live. Less people and less talent will want to teach in a Wisconsin where the teachers aren't able to collectively bargain in a union. This also applies to people involved in university research, a huge deal here at the UW where we are recognized as a global leader in medicine.

Ending collective bargaining PERMANENTLY is short run fix with terrible long run implications for education and the overall quality of this state. Gov. Walker keeps saying things like, "this is about the budget. We can't pass this debt down to our kids." You have to consider the pros and cons of this thing...yeah, it will save money today, but at what cost tomorrow? Would you rather give your kids a sub-par public education down the road, with nothing but a headless UW-colleges system to look forward to post graduation?

I apologize for the long post, and if I offended you or Deborah in regard to the photos she took. I just feel passionate about the topic, and I hate seeing something like these protests undermined by idiots who spent either too little or way too long thinking of something clever to put on a sign.

Sorry, but I see I got your name wrong, above.

Your argument is premised on the notion that public sector unions are a "check" on government. I am arguing that they are in fact a goad that makes government grow bigger and faster, and absorb more and more of the rest of the economy.

People often note that the bureaucrats whose job it is to negotiate with government worker unions are pushovers -- because they have no dog in the fight. The money they are negotiating over is not theirs, nor is it really their bosses property either. It is taken from the taxpayers, and there is lots more where that came from.

I have read that, because the pay-and-perqs of public school teachers is artificially high (in Milwaukee, an average of $100,000 per year per teacher), there is currently a glut of teachers, with a sizable fraction of accredited teachers out of work or pursuing other careers.

Also note that the UW faculty, which as you point out does so much world-leading research, is not unionized at all.