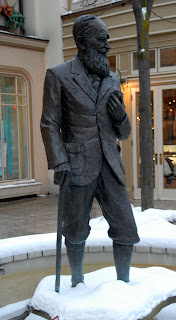 As a lagniappe following my most recent post, here is a miscellany of Shaw quotes that are obviously not true:

Defending his vegetarianism: "Think of the fierce energy concentrated in an acorn! You bury it in the ground, and it explodes into an oak! Bury a sheep, and nothing happens but decay." If this means anything, it means that there is more nutrition in an acorn than in an equal amount of sheep tissue. Of course, the reverse is true. The reason a buried sheep doesn't do anything is that it is not a seed. On the other hand if you bury a fertilized sheep ovum in a sheep uterus, it explodes into something far more good to eat, and good for you, than a tree.

"There is only one religion, though there are a hundred versions of it." It is impossible to exaggerate how fatuously stupid this comment is. Under what conceivable interpretation are Islam and Buddhism the same? Yet this perfect piece of ignorance is endlessly repeated by Shaw's spiritual brethren.

"He who can, does. He who cannot, teaches." As a teacher, I resemble this remark. ... Seriously, if you can't do it, how could you teach how to do it? I think this obvious falsehood is repeated so often because it is a perfect model of sparse, severely economical wording, not because it is true.

"[Brahms' German Requiem] could only have come from the establishment of a first-class undertaker.” Once again, this is very cute, but that doesn't make it just or true.

"I have always held the religion of Muhammad in high estimation because of its wonderful vitality. It is the only religion which appears to me to possess that assimilating capability to the changing phase of existence which can make itself appeal to every age." Again, GBS has it bass-ackwards. As Nietzsche pointed out, the champion of chameleon religions is Christianity. During the Enlightenment Christians were rationalists, during the Romantic era they were soulful and idealistic. In the twentieth century they got into existential anst. What is the essence of Christianity? There's not much to it, really. On the other hand, Islam does not assimilate, it does not accommodate, and it does not negotiate. Like it or lump it, it is what it is. It's "appeal to every age" is its integrity, not the accommodationism for which he idiotically praises it.

"A government which robs Peter to pay Paul can always depend on the support of Paul." This would be right, except that he probably means it as a reason for robbing Peter.

"My specialty is being right when other people are wrong." This shows that truth, too, can stand on its head.
Posted by Lester Hunt at 1:45 AM

hahaha - these are jokes and off-hand witticisms; turn in your things and go home, Professor

Not at all. Some, like the bizarrely ignorant comment about Islam, were made repeatedly throughout his life. Similarly, his defense of eugenic mass murder (see previous post) was made in forums that made it obvious he was not kidding. And I didn't even get into his life-long insistence that Shakespeare couldn't write good plays!

Shaw obviously was unaware of the Icelandics' practice of burying a certain species of shark, poisonous until decomposed, edible some six months after burial.

Anyway, his absurd argument reminds me of that proffered by a vegetarian to me once: "If you were in a room, and were starving, and there was a carrot and a chicken, which would you eat?" She suggested I'd probably go for the carrot first, rather than kill the chicken and eat it; I agreed, but not because of the reason she figured - that the idea of killing the chicken was somehow off-putting to me; my reason was simply that it would be easier and in the absence of the necessary tools to cook, safer than the chicken. Duh!