I repost this every year. If I find time, I'll add an update at the end.
Christmas, as Gene Shepherd told is, is the high point of the kid year. It is also one of the high 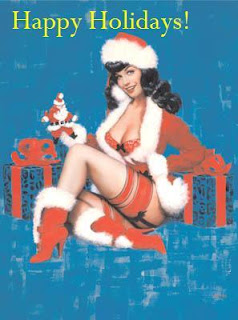 points of the music year, and the food year, a time for comfort food and its musical equivalent. Here are my favorite versions of this musical comfort food.

1. Bobby Darin: The Twentyfifth Day of December Bobby is one of my favorite musicians of all. He was haunted by a fear that a heart condition would take him out relatively early in life (a premonition that turned out to be true). As a result, he tried to make every moment count, and strove to make every artistic project of his something special. This one is no exception. The songs in this collection are from two sources. One is Christmas carols that are essentially hymns (eg., "Adeste Fidelis"), and the other is black spirituals having to do with the Nativity story (like "Go Tell it on the Mountain"). Santa, Frosty, and Rudolph are all conspicuously absent. Though there is nothing "churchy" about it, this is a great album for someone for whom Christmas is not merely a holiday, but a holy day.

2. A Canadian Brass Christmas In purely musical terms, this is probably the finest Christmas album I've heard. The C. B.'s "arranger" (in this album he is very much a composer), Howard Cable, is some kind of genius. His styles range from an eighteenth-century set of theme and variations on "Here We Come A-Wassailing" to a 'forties swing-band version of "Rudolph the Red-Nosed Reindeer," all done with great spirit and style. This would be a good album to play at an elegant holiday-season dinner party. Your guests will look at you with respect for your excellent taste.

3. Crash Test Dummies: Jingle All the Way This CD is remarkable for two things: First, a very beautiful version of the haunting native American "Huron Carol." Second, the best version of "Jingle Bells" ever made on planet Earth. It's done for humorous effect and is guaranteed to make you laugh. (Just click on this link and see!)

4. Christmas with the Vienna Choir Boys, Placido Domingo, and Hermann Prey These were some of the greatest musical performers living at the time the recording was made (baritone Prey died in 1998), and this album is as good as it should be. The feeling is very German. There is "O Tannenbaum," of course, but also two hymns by Luther. All very effective.

5. The New Possibility: John Fahey's Guitar Soli Christmas Album The late, great John Fahey taught a generation of steel string, finger-picking acoustic guitarists what amazing things can be done with that instrument. This is fairly late Fahey, so the musical thinking is very advanced. Most of the entries are really variations on a familiar tune, rather than the tune itself, and the variation is some times so remote that it takes a minute or so to figure out which song Fahey is supposed to be playing. However, the effect is profound and powerful. If you want a more "Christmassy" album, try his first Christmas album, which is much more conventional, but still great.

6. Arthur Fiedler and the Boston Pops: A Christmas Festival I put this one on the list because it contains both Leroy Anderson's "Sleigh Ride" and his "A Christmas Festival," both of which were originally written for the Pops. "Festival" is a splendiferous synthesis of five or six familiar tunes worked up in the manner of a nineteenth or early twentieth century symphony. The syncopated triplets leading into the coda (which is based on "Jingle Bells") remind be of Sibelius.

7 &8 Oh Come all Ye Faithful: Christmas Carols at Kings College, Cambridge and A Traditional Christmas Carol Collection from the Sixteen Harry Christophers Two beautifully traditional albums of choral versions. The Cambridge one is sung in a room made of stone at the command of Henry VIII. You can't get more traditional than that!

9. A Hannukah Celebration I'm not putting this on the list to be PC. It really is a wonderful album of concert hall arrangements, mainly in the Romantic tradition, of classic melodies. One of my favorites on this disk is Samuel Adler's piece, "To Celebrate a Miracle," which suggests the influence of Adler's teacher, Aaron Copland.

10. Bob Dylan: Christmas in the Heart Recent critics have called the 67-year-old Dylan's voice "gravelly." Nietzsche might call it übergravelly. I like this one because the arrangements are so unabashedly retro. Its like a 'forties or 'fifties Christmas album. (The cheesecake picture above is from album art for this recording.)

Merry Christmas and Happy Holidays!
Posted by Lester Hunt at 12:05 AM

I am curious how you reconcile your religious views with enjoying Christmas. I personally enjoy Christmas (family time etc..), but I not am not religious.

By the way someone gave me this last year, and it was throughly entertaining. Listen to silent night via the Amazon demo. Hysterical!

Thanks for the link. This looks like a fun album. I'm going to order it right now. Looks like it would be a great stocking stuffer for a certain young man.

As to your question about Xmas and religion, that's a rather long story. Maybe I should write a post about it. The short version is something that a leftist friend of mine said to me years ago: Christmas is a capitalist holiday!

Thanks for the recommendations. I'm actually a fan of both the Canadian Brass and the Crash Test Dummies, but had no idea they had X-mas albums. I'm a bit puzzled about what Dylan is up to here: both because he's--well--Bob Dylan, and because he's Jewish. Any thoughts?

I heard somewhere years ago that Bob Dylan went through a born-again Christian phase. Don't know if it's true or not.

I wasn't raised in a religious home, but I think there is a broad Christian 'culture, norm' that people of my kind of background enjoy because of associations with happy family times (festive meals, presents, get-togethers) I have many Jewish friends who claim to be atheists but always celebrate Passover and Hanukkah. I'm surprised when they don't get why I like to celebrate Christmas and (to a lesser extent) Easter. And, who are we all giving thanks to at Thanksgiving? :-) Christmas is a festive, albeit hectic, time of year with parties and I love singing the Messiah and traditional carols. Religious traditions are deeply embedded in our experience of social reality, and somehow I enjoy the beauty of the rituals and the architecture of cathedrals without feeling any need or contradiction to also accept specific propositions of faith.

A very merry Christmas and Happy New Year to you, Lester!

I was about to say more or less what Ann just said. Dylan did go through a born-again Christian phase, but his album does not suggest a frame of mind in which this music has mainly religious significance (the first cut is "Here Comes Santa Claus"). It is very much in the comfort food tradition. The musical styles seem to me to date from Dylan's childhood (the 'forties and 'fifties) and so would be the sort that evoke nostalgia rather than sectarianism.

Merry Christmas and happy New Year to you too, Ann!