I repost this every year, for the obvious reasons. Siskel and Ebert used to have a feature they called "Guilty Pleasures" in which they talked about movies that they loved despite the fact that they are frankly not artistic masterpieces. This is one of mine. I am sure Hallmark with be re-airing it multiple times between now and Christmas - it is one of the best things they have done. I recommend setting your DVR! (It is also available on DVD.)


This must be one of my favorite movies. Deborah says I've seen "The Christmas Card" (Hallmark, 2006) more times than Vertigo, which is true. By a factor of five or six. She thinks my love of it may be an early sign of approaching insanity.

There is I suppose an interesting question here. It would be hard to deny that I am an educated person. I have taught film at the university level many times, and published on it as well. Why have I watched my DVD of this Hallmark made-for-TV movie so many times?

Part of the reason is purely personal and idiosyncratic. It was filmed entirely on location in one of my favorite places on Earth, beautiful Nevada City, California. (Imagine a pristine New England village moved to the foothills of the Alps.) It is odd that NC has seldom been used as a film location, and except for this film has never "portrayed" itself.

Also, it is the last film made by Lois Nettleton, one of my favorite actresses.

In my defense (aside from the fact that I am not the only one who loves this little film): Though it is a Hallmark feel-good show, it is probably the best one ever. It is almost certainly the most watched, and Edward Asner was nominated for an Emmy for his role in it.
More important, for me, is the fact that NC is perfectly cast and very effectively used for its role in the film. Sgt. Cody Cullen (John Newton) is the sort of person who would be happiest in a place where he can put down roots, enjoying friends and family, with little need to ever wander far from home. But his father is killed in Vietnam when he is a child, and his mother, emotionally shattered, dies shortly after he graduates from high school. He joins the army, thinking that it will be the family he has lost. But people keep dying around him. When he receives a Christmas card as part of a church cards-for-service-people program from the home town of a dead comrade, killed in a rocket attack in Afghanistan, he reads it compulsively until it nearly falls apart. Before long, he comes back to the states and meets the woman who wrote the card (Alice Evans), struggling with the question of whether to reveal to her that for a while now he has been obsessed with the thought of her and her town, the perfect putting-down-roots place, Nevada City.
...

Below is the Joany Kane (right) the writer of "The Chrismas Card" when just this year she visited Nevada City for the first time. For some reason, Hallmark has only produced one more script by Kane though, as she told me in an email exchange, she has submitted a number of others. On the left is the current mayor of NC. Over Herronor's shoulder you can see a picture of NC's historic National Hotel, which appears in the movie. (Hat-tip for picture to the Nevada City Union.) 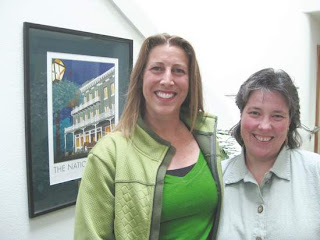 BTW, here is an article about the lumber company where the work-related scenes of the movie were filmed. Folks who scouted possible locations found that most lumber mills in the area consisted of corrugated metal buildings that were not very photogenic. At last they found this "historic" mill that still does things "the old-fashioned way."
Posted by Lester Hunt at 12:14 PM

I have a special relationship to the late Lois Nettleton. Indeed, she was married to humorist Jean Shepherd (for about 6 years in the early 1960s.) She was an early listener to his "Night People" broadcasts and recorded his shows and discussed them with him. She wrote extensive notes to me regarding my book "Excelsior, You Fathead! The Art and Enigma of Jean Shepherd," describing how much she appreciated his genius and how much she wanted increased recognition for his creative works.

In Seinfeld, Season 6 DVDs, Seinfeld makes special mention of her (she appears as the mother in "The Gymnast" episode). In his commentary, Seinfeld says that she was married to Shepherd, continuing, "He formed my entire comedic sensibility. I lerned how to do comedy from Jean Shepherd."

Very interesting! I didn't know there was a biography of Shepherd out. I've ordered a copy of your book.

In this post I originally had a line mentioning Nettleton's marriage to Shepherd as evidence of what an interesting and smart person she was. But blog posts have to be short and I try to be ruthlessly on-topic, so I deleted it.

That Seinfeld episode is the one in which she catches George eating an eclair out of the trash. She was also in one of my favorite Twilight Zone episodes, "The Midnight Sun" (3rd season). She did the audio commentary on the DVD, which is worth a listen.

A guilty pleasure? Mine is to wander into shops and engage in whittling time, with conversations about random events, and waiting for an obscure fact to surface later. This morning I chatted with a used bookseller in Hampstead-a crazy shop with books strewn on the floor as he admitted he had a temper tantrum earlier in the day. We discussed the gifts of kings and Queens after WW2, and sure enough the Trafalgar Square Christmas tree was pointed out by our Baby Jane actress and Sherlock Holmes tour guide but who knew not why the Norwegians made it their annual gift.

Guilty? Those pleasures of yours sound pretty classy to me!

It is wicked to point out a person's ignorance but she made a silly remark about her celebrity and I was teaching her a lesson called humility. Not really my place, but it was a pleasure, and I do feel a little guilty!

We were married in Grass Valley and had our reception in Nevada City at the Miner's Foundry, just a beautiful area!!

For you, viewing this film would probably feel like watching a home movie! That's what it's like for me, anyway.