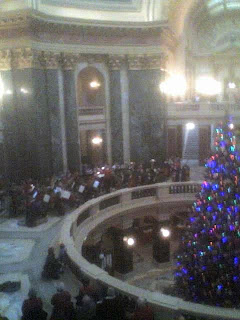 Chris Hitchens tells us, amusingly enough, that he hates Christmas because it gives us a glimpse into the nightmare of living in a one-party state, such as North Korea or Chicago. You go around hearing the same music, seeing the same images, etc.

Actually I like it because, though you do hear environmental music all year long, this is the only time of the year that most of it is actually half-way good.

Partly, I suppose, this is because a lot of it has some religious meaning, so that people feel a responsibility to measure up to the exalted subject matter. Also, just because the Christmas repertoire consists mainly of a few dozen tunes, they had jolly well better be things you can hear year after year, for centuries (Praetorius' "Lo, How a Rose E'er Blooming" dates from around 1600) without going mad.

Also, again because of the extreme age of some of them, they are often in minor keys that you don't hear too often nowadays. The copy of "God Rest Ye Merry, Gentlemen" I just glanced at is in E minor. (Who says minor keys are sad?) Some, like older versions of "What Child is This?" are in modes yet older and more exotic. Such a refreshing break from the monotonous mediocrity of popular music nowadays!

But I suspect Christopher is not a musical person.