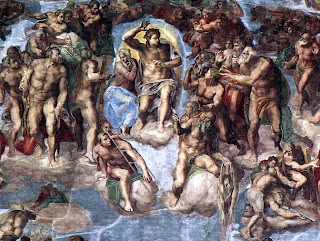 A comment made anonymously on my last post reminded me of a dimension of this issue that had slipped my mind entirely. I had pointed out that my attraction toward the wild places of the earth seems to involve seeing them as sacred. Is this a sort of religiosity, I wondered? Anonymous asked, somewhat more specifically, "Why is it that when we step into certain natural settings we are enlivened with a feeling of exhilarated reverence...?" What struck me about this question was the "certain natural settings." I had been thinking of the question as one about wild places in general. But now that I think about it, well yes, the phenomenon I have in mind is really much more specific than that. There is a small lake a short distance from the one pictured in the post below, very similar to it in many ways, but my reaction to it is very different from my reaction to "my" lake. I visit my lake every chance I get. I would never stay overnight at the other one. But it isn't because it is physically inhospitable. I find it somehow gloomy and disturbing. Frankly, it gives me the creeps.

Why? Actually, I have a hypothesis about that, a guess. It also might explain a lot of religious experience as well. It involves a speculation about the evolution of the brain, a subject I know almost nothing about -- so consider the source! Anyway, here goes.

We have two fundamental, radically different ways of understanding the world, and we are amazingly good at using both, from a very early age.

One is to read human expressions. When Nat was less than a full day old, he was already smiling back at me and the hospital staff. I noticed it and so did the nurses, who insisted that this was indeed what he was doing. I found this absolutely amazing. In a room full of blinking lights and other interesting stuff, his gaze went straight to the human faces, as the most interesting and the most understandable things he could see. This was something he did not need to learn to do -- or maybe he was predisposed to learn it amazingly fast.

The other fundamental way of understanding is cause and effect. Starting very early, babies enjoy shaking a rattle in order to cause the rattling sound to happen. I can remember when Nat, still a babe in arms, repeatedly pushed a doorbell with his toe in order to be able to hear the doorbell ring inside the house (far away!). Nature is a push-pull toy, and kids learn that very quick!

So we have expression reading for understanding people, and cause-and-effect for understanding the physical world. Each has its home in a different explanatory context. The thing is, though, that each way of understanding is not attached by evolutionary hard wiring to its normal context. We are free to turn to the physical world and read its expression. That's when a lake can seem to be smiling at us. This explains the difference between the two lakes above: they have different "expressions." One lake is high on a mounded expanse of pure granite, exposed the the brilliant sky. The other is deep in a hollow, with dense, dark forest growing right up to the water's edge. It doesn't smile at all.

Where does religion come in? Well, it seems to me that this experience can characterize your response to the physical world in general. Nature can seem to have the sort of "meaning" that a face has. Then you can get the feeling that the world we see is merely a thin membrane stretched over another, hidden one, and that this other one is the real meaning of this one. Like the meaning behind the smile. Then nature becomes the stage of humanly-meaningful moral dramas, like sin, salvation, judgment, and so forth (as in Michelangelo's interpretation of that theme, above). When you pray, you really feel that you are talking to Someone, and the He/She/It is listening.

It seems to me that this hypothesis of mine might be able to explain some otherwise very mysterious facts about religious feeling and behavior. One is the fact that religious people often claim to be certain of their religious views, even in the total absence of anything that the rest of us can perceive as evidence for these views. It may be that some people are much more susceptible of this experience I have described -- that of feeling the universe as having the sort of meaning that human expressions have -- than other people are. It could also be that some people are much more prone to treat this experience as evidence, to draw conclusions from it. For untold thousands of years, human beings who have my experience of these two lakes would have drawn conclusions about the spirits attached to these two places. I do not.

This might also help to explain why religion is a human universal, why we find it everywhere and why it shows no sign of going away -- and why scientific thinking (ie., cause and effect thinking) completely fails to predict it. There may simply be no way for an entire culture to keep its expression-reading faculty attached to its home turf. It wanders, and people are influenced by the result. Have to be.
Posted by Lester Hunt at 2:22 PM

I've been pondering your interesting hypothesis for some days, unsure what to make of it. Let me offer a fumbling attempt to interpret (I hope not misinterpret) what you've said, pose a few questions, and recommend a good book on the theme of finding meaning in nature.

You say that our biological instinct to read expressions, as evidenced in the earliest days of life, is not tied by evolution to genuinely expressive objects; namely, to human faces. Set loose from its proper objects after infancy, the instinct becomes a kind of roving appetite to find expressions, and it seizes on a great variety of objects to find the satisfaction it seeks. Perhaps your hypothesis needs to emphasize this. What this instinct really seeks is human expressiveness as such, not literal expressive faces, and it wants this expressiveness so ardently that eventually it will begin to find it almost everywhere it looks. The term "expression," then, refers to almost anything -- a blankie, a plush toy, a pet dog, a tree, a body of water, a whole landscape -- whose features can somehow be read as having something like a human life behind it and as somehow communicating this life to the beholder. (Tracing in detail the series of displacements from the literal smiling face of the babe's parent to the figurative smiling face of the adult's mountain lake would be extremely difficult to do, it seems to me. But doesn't your hypothesis need such a genealogy to make it more plausible?)

Let me try to connect this with your experience of the mountain lake. Evolution has blunderingly condemned us to the "pathetic fallacy," and we commit this fallacy unconsciously, compulsively, and in a huge variety of ways throughout our lives. It is the ur-metaphor at the base of everything religious, from the crudest animism to the most etherealized intimation of a noumenal X "whose dwelling is the light of setting suns." Your own experience of the mountain lake is an instance of this fallacy in its more sublimated form. In your case, of course, you know that this fallacy is operative underneath your experience of the "sacred." You know that it is systematically conferring on things a human quality that they don't have in reality. Or maybe I should put this as a question. When you're at your mountain lake, does the scientific side of your nature dismiss your "religious" side? Do you respond to the lake's "sacred" smile as a charming illusion only?

Why not say rather that evolution has keyed you to respect and love the deeper life of things; that it has endowed you with an instinct to endlessly and redundantly find life where otherwise there would be only the lifeless push and pull of matter? Or does such talk strike you as at bottom an infantile longing for human meanings where none can be found? In this connection, Anthony Rudd has written a very interesting book entitled "Expressing the World" in which he defends what he calls "the ontological depth of things." He argues that we should view the non-human world "not just as brutely there, but as expressive, somewhat as we see human faces and behavior as expressive." Probably you would disagree with Rudd's Romantic proposals for re-enchanting the world, but his book is a highly developed treatment of the theme, and you might enjoy it.

Thank you again for your stimulating remarks!

You and Anon are dancing awfully close to the edge of the phenomenal world. See Merleau-Ponty et al. Meaning, embodiment, experience of that embodiment in the world. Why religious or sacred? Because that moment simply is our humanity marvelling at being embodied in the world. Religion or other constructs on top of that are just that, constructs.

I recently came accross your blog and have been reading along. I thought I would leave my first comment. I don't know what to say except that I have enjoyed reading. Nice blog. I will keep visiting this blog very often.

Thanks! I see you went pretty far back into the archives!