The Herostratus syndrome. That's what they ought to call it. Herostratus was the man who, one summer day in 356 BC, set fire to the Temple of Artemis at Ephesus and burned it down -- in order to become famous. Of course, it worked.

The week after John Lennon was murdered, I read in a newsletter that a friend of mine subscribed to a statement that went something like this: John Lennon was killed by some asshole who wanted to get his name in the papers. Well, you won't read it here.

I've always liked that idea. Notice you've never read the name of the Virginia Tech shooter here. And guess what? You never will! You also won't see any of those self-posed pictures he sent to NBC while he was between murders. The picture immediately above shows the ruins of the temple at Ephesus.* Now there's something that deserves to be remembered!

Should NBC -- and papers, news shows, and web sites all over the world -- have publicized those videos and pictures? Here is a principle that is relevant: it is morally bad, other things being equal, to help a criminal to achieve his or her criminal intentions. If I kill my uncle Julius in order to inherit his money, don't give me any of Julius' money!

This doesn't (yet?) answer the question about the NBC images, though. When I say "other things being equal," I mean to recognize that there can be overbalancing reasons on the other side. What are they in this case?

That "the people have a right to know"? That's just silly. I don't even think the people who talk that way mean what they say. If you have a "right to know x" and I know x, don't I immediately lose my right to remain silent and not tell you x? What about my rights? 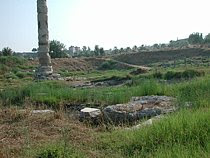 the answer. But what it is, I am really not sure.
__________
* Added later: A commenter pointed out that the above picture is actually the Library of Celsus. I got that picture from a web site that obviously mislabeled it. Another website indicates that what remains of the Temple of Artemis is actually little more than the single column you see here at the left. The blogosphere: imperfect, but self-correcting! (Or can be.)
Posted by Lester Hunt at 3:03 PM

Alas! The shooter who killed 36 students and teachers at V Tech last week is in fact named numerous times in the comments to your blog, comments that you yourself have approved and posted. Are you not, therefore, directly resposnible for disseminating the identity of what's-his-name, despite your wish to have his moniker blotted from the book of life? Should you not have exercised your editorial or censorial discretion by deleting all direct references to his name? What's more, did you not just contribute to the "immortality" of Herostratus by telling those of us who before now never heard of him of exactly who he was and what he did? And did you not also just show us a striking image of his very claim to fame, viz., the ruined temple of Artemis? Indeed, did you not just augment his place in history by naming a syndrome after him? It seems to me that it's hard to surpress facts and the images that support them, and the question is: Is it ever really desireable? News stories don't kill people. People kill people.

I'm being somewhat facetious, of course, but I'm curious how you reconcile this.

As to the provacative question you ask, here's a first suggestion. Of course we should not give you your Uncle Julius' money. The question is: Are we morally at liberty to report that you killed your Uncle Julius, as well as the facts surrounding the murder? Your answer might be: Yes, because you didn't kill Uncle Julius specifically to make headlines. But then the question is: Do we ever know enough about the motives of a murderer to decide that his story should be surpressed?

Let me reflect more on this. Thank you again for your great blog, Professor!

Not wanting to give this guy more publicity is my own moral choice. It's true that I moderate comments on this site, and its also true that I see (eccentric as this may sound) the mere act of repeating his name as to some extent morally negative. Part of the interesting issue here is: what is the nature of this negativity, and how heavily should it be weighted?

I don't weight it nearly heavily enough to want to use it as a reason to censor comments on this blog.

I also think that giving a Herostratic criminal free publicity -- which is I suppose inevitable if we report on it or discuss it at all -- is not nearly as bad as rewarding me for killing my uncle by giving me some of the money. But why is it so different?

It is an interesting question! Part of the answer, I guess, is that reporting and discussing is mainly a good thing, whereas giving me some of Uncle's money (instead of giving it to someone else) has no up-side at all.

"Not wanting to give this guy more publicity is my own moral choice. It's true that I moderate comments on this site, and its also true that I see (eccentric as this may sound) the mere act of repeating his name as to some extent morally negative."

I agree, I don't even know his name. Neither do I know the names of who killed who in Iraq.

Thanks for this post. At the time, I was particularly disgusted with NBC for showing the images. It reaked of crap journalism.

However, with the availability of the images, some people did tie his actions together with the movie Oldboy. Is this of value? Perhaps, perhaps not. But the connection might not have been made had the movie not been widely released.

At the same time, what is without a doubt despicable is NBC's decision to stamp their logo on all of those images. Why? Because you were the news outlet of choice of some murderer? You take pride in that? What value could that possibly suggest about your organization? None, at best.

Excellent post. The point deserves wide circulation. I've found the fact that the media hasn't condemned NBC for showing that video surprising, but maybe I shouldn't.

Something from Aristotle, of possible relevance:

Not to be a pedant, but that's the Library of Celsus, a superb human monument. The Temple of Artemis is basically a field nowadays.

As for the shooter, to hell with him.

Nothing pedantic about that -- thanks for the tip.