The Virtues of Capitalism 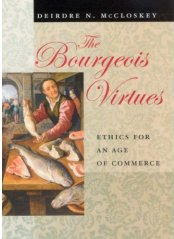 Also posted at Liberty and Power:

If you’re interested in exploring the moral foundations of market institutions, I recommend The Bourgeois Virtues by Deirdre McCloskey (University of Chicago Press, 2006). One thing that makes the book unique is that it’s a defense of markets based on the virtue-ethical tradition (the author calls herself an Aristotelian libertarian). So it discusses the influence of institutions on moral character, and vice versa. It’s full of little-known (at least to me) historical, cultural, and literary facts. Another unique feature is that it is a non-individualist defense of the market. This of course could be either a strength or a weakness of her account, depending on your point of view. She characterizes her position as “two and a half cheers for capitalism,” thus going a half-cheer further than the neo-con Irving Kristol, but not as far as I would go. I’ll be on a panel discussion of the book at the Chicago APA on Saturday, April 21. You can read my prepared comments for the panel here. (Also, I just noticed you can find McCloskey's own account of her book here.)
Posted by Lester Hunt at 11:29 AM