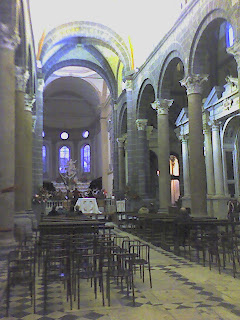 It was grueling. No sooner had I returned from the Workshop on Equal Respect in Italy than I had to rush off to a Liberty Fund in San Diego on the aethetics of Friedrich Schiller. I figured out that in less than a week I crossed nine time zones! I learned a lot at both conferences, but I'm very glad I can stay put for a while.

After the Pavia workshop, my friend Valeria Ottonelli showed me around the Genoa and Rapallo area. Here is a picture of a partly Romanesque church in Valeria's neighborhood in the medieval part of Genoa. I think it is called San Donato. Here we sat and listened to a choir, evidently visiting from France, that was rehearsing a mass. It was a beautiful nineteenth-century composition (my favorite era!) but I didn't recognize it.

As Valeria pointed out to me, this building is asymmetrical: the right side has shallow alcoves with huge paintings in them, while the left side has deep recesses with an individual chapel in each one. Most of these old churches seem to be aesthetically clashy. They were built, remodeled, added to over a period of centuries, with little thought for values like stylistic coherence and consistency. I guess that is one difference between making something that serves a serious purpose and making "art."
Posted by Lester Hunt at 11:30 AM