The Ethics of Artistic Hoaxes 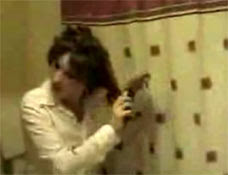 Unless you live at the bottom and an ancient mineshaft, you have seen the notoriousHaircut Video and heard that it was subsequently revealed to be a hoax. Bridezilla was and actor (talented Canadian Jodi Behan) and the haircut was a wig (though it appears Behan was hacking off some of her own hair in the film).

I was one of the lucky two million people who saw it when they thought it was genuine. I found it amazingly funny and at the same time really disturbing. After the first viewing, I was shaken, but compulsively watched it again, like the guy who can't take his eyes off the car wreck. Both times, I laughed until I cried. I showed it to Nat, our 17 year old son, and I think he found it actually too frightening to be funny.

What I found a little odd was the moralizing tone of some of the comments after the hoax was exposed. The actor who played Jodi (which is also her real name) was asked by the Toronto Star if she "regretted" what she had done. Since it was obvious that the video made her instantly famous and will probably help her career immensely, it was clear that moral regret is what was meant.

My first reaction was, What the Hell? Is putting something on Youtube supposed to be some kind of sacred trust?

Now that I've thought about it a little more, I have to admit that I am a bit of a rigorist about deception in general. I don't like lying or liars. I don't claim to be perfect in this respect myself, but I generally regard any lie I catch myself telling as a case of abject, crawling weakness. Nothing to brag about. The main reason, I think, is that liars are losers. Typically people lie because they feel (perhaps rightly) that they cannot get by on their merits, so they invent fake ones. So why do I applaud a hoax like "Bride Has Massive Hair Wigout"?

I think it begins with the axiom is that art is not life. It isn't a coincidence that "art" sounds like "artificial." Art projects unreality on the screen of imagination, where we treat it for the moment as if it were real, sympathiizing with or fearing in behalf of characters who never did exist. As many people, beginning with Plato, have pointed out, creating a fictional narrative, wheter written, enacted, or narrated around a primeval campfire, is perilously close to lying already. This makes it, Plato thought, ethically dubious from the gitgo. Or you can see it as a sort of holiday from the ethics of deception.

That is of course how I see it. In real life, a lie is not generally a victimless offense.

There are two sorts of immoral lies in real life. One might be called the exploitative lie. This is the case of someone who lies to you in order to get something from you under false pretenses: approval, escape from deserved punishment, permission to conduct a war, etc. The enchantments worked by the artist differ from exploitative lies in virtue of the fact that they are for your benefit. The artist is trying to entertain you or possibly to enlighten and instruct you. I think this is directly relevant to the deceptiveness of the "Bride" video because I doubt if it would have been as funny as it was if I had known up front that it was fictional. And I am sure that the mirth would have been piquantly, so memorably mixed, as it was, with sheer horror. So I am grateful to the makers of this video for having fooled me.

The other sort of immoral lie that we encounter in real life is not "selfish," like the exploitative lie, but "altruistic." This is the paternalistic lie. In this sort of case, someone lies to you for your own good. Perhaps you have a terminal illness and the Doctor, thinking you cannot handle the truth, tells you that you will be ill for a long time, but that your prospects for recovery are good. Despite the "good" intentions behind it, the paternalistic lie commits the same wrong that the exploitative one commits: it is an active attempt to prevent you from rationally controlling your own life by deliberately feeding you false information, which you will then use as if it were true. It is an attempt to hijack your life. To this injury, the paternalistic insult adds an insult -- the judgement that you cannot adequately control your own life by weighing and acting on the truth.

Artistic hoaxes like "Bride" differ from both sorts of immoral lies: they do not feed you information that you will use to make choices regarding the real world. The deceptions involved are only about the fantasy-world projected in the art-work itself. They do not affect the real world outside this fantasy-world.

Things are very different when a hoax is presented, not as a narrative for your entertainment, but as a real-world event. The Piltdown Man hoax caused real scientists to waste their real and valuable time proving that it was a fake. The Donation of Constantine helped real-world Popes to establish themselves as predatory temporal princes, bringing centuries of shame down on the Christian church. But "Bride" exploited and insulted no one, and delighted millions.
Posted by Lester Hunt at 12:33 PM

Some thoughts on your very interesting post on "Bride Wigout."

I tend to think of hoaxes as generally suspect because they're unannounced deceptions and therefore liable to be taken the wrong way or to get out of hand. Think, for example, of Orson Wells' War of the Worlds.

The difference between hoaxes and art is that art is known to be art before we decide to avail ourselves of it. We pick up a novel or go to a play fully prepared to allow our imaginations to be led by the artist's controlled illusions. We want his fabrications to take us "away" and we freely and eagerly give ourselves up to them. A hoax, by contrast, is sprung on us unawares. We have no idea that it's coming, and its whole point is literally to assault us with something that seems entirely real. A hoax isn't revealed as a hoax until the "game" is played out, often scaring, insulting, or injuring its victim(s) in the process. An "artful" hoax, though often terribly convincing, isn't art in the same way that a novel or play is precisely because we are ignorant of the "art" until it is too late and we find ourselves the butt of a joke. Or worse.

If there were an ethically valid criticism of "Bride Wigout" (I say if there were) it might be, simply, that it was a hoax, morally suspect for that reason alone. Of course, anyone who accesses the internet, and especially Youtube, unprepared to be fooled is obviously ignorant of the medium. Besides being an echo chamber of rumors and misinformation, the internet is a screening room for every amateur in the world to try his hand at putting something over on a credulous public. The very first question almost anyone viewing this clip would ask himself is: "Is this real or fake?" The context tends to rob the would-be hoax of its deceptive force. For this reason alone, it seems to me, "Bride Wigout" is not a real hoax and is in no sense blameworthy. A true hoax slams its victim with the sensation that this is real and no mistake.

Can there be morally justified hoaxes; for example, to teach a malicious hoaxster a good lesson? Or is it always wrong to teach with a lie? And what about harmless hoaxes such as the old Alan Funt Candid Camera programs? I would suggest that the motive of the perpetrator has a lot to do with the moral status of the hoax, whether its malicious, thoughtless, or just for laughs. Also, the nature of the hoax itself, what we might call the seriousness of its matter, has an important bearing on its moral quality. Faking murder or suicide is always extremely bad. Finally, morally acceptable hoaxes tend to be carefully thought out and highly controlled, with a very high probability that the "victim(s)" will be as entertained as the perpetrator(s) once the hoax is revealed.

I'm not sure how much any of this disagrees with what you've said. Thanks again for your always-engaging blog.