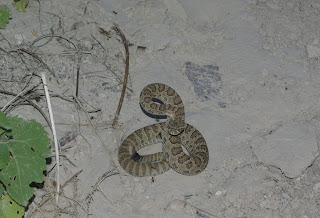 I almost stepped on this Prairie Rattlesnake last night around sunset.  In fact, I would have if it weren't for his sudden and furious rattle.  What a startling sound!  Literally:  It gave me a huge startle response.  It starts out like a triple forte blast on some weird kind of percussion instrument and just keeps going.  I jumped back before I knew what was going on.

Odd that exactly the same thing happened to me almost thirty years ago, in almost exactly the same spot.  This little fella is cooling off on the floor of Indian Creek, Bufflalo Gap National Grassland.  Last time, it was much bigger one, who was slithering through the prairie grass, about 100 yards away.

That was also at sunset -- rattlesnake time!  That's when the are out and about.  Though I should have been wary, both times they took me completely by surprise.

BTW, this one isn't as big as he probably looks to you -- a little bigger in girth than my index finger.  I wouldn't want to be bitten by him just the same. Even if a rattler bite doesn't kill you, it will leave you gruesomely maimed and disfigured if you don't get antivenin soon.  The nearest hospital to where I was at this moment is probably in Rapid City, about 40 miles away, and some of those miles on some really bad roads.

So the best medicine in this case is not to get bit in the first place.
Posted by Lester Hunt at 4:56 PM

Sounds a little like the idea of the Eternal Recurrence, Lester.

Only one way to find out.