Why I am Against the Death Penalty 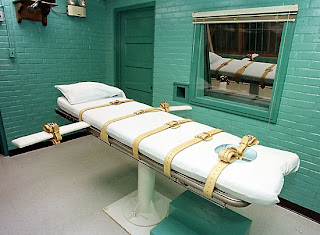 In the pro-death-penalty column by Jonah Goldberg that I posted about yesterday, we see this statement:

We hear so much about the innocent people who’ve gotten off death row — thank God — because of new DNA techniques. We hear very little about the criminals who’ve had their guilt confirmed by the same techniques (or who’ve declined DNA testing because they know it will remove all doubt). Death-penalty opponents are less eager to debate such cases because they want to delegitimize “the system.”

This statement seems so strange to me that I am not sure I understand it. For one thing, it should be obvious to Goldberg that the concern for death penalty foes is not exactly the people who got off death row, but what this indicates about the people who did not. So far, the Innocence Project has exonerated 273 convicts with DNA evidence, 17 of whom had been on death row. Since DNA evidence is available in only a fraction of criminal cases, this means that innocent people have been and will be executed in the large number of cases where it is not.
Government does not do anything very efficiently. How efficient do you think it will be at only executing the guilty?
If we have such an institution as capital punishment, we know that we will execute the innocent, just as, when we go to war, we know that we will kill many non-combatants. That is why war can only be justified by the very gravest of reasons -- namely, national self-defense against actual or imminent attack.
What is the reasoning that is supposed to justify capital punishment? Goldberg asks us to consider the many guilty people who are executed.
Maybe the idea is that, while executing the innocent is a bad thing, executing those who deserve it is a good thing. You have to weigh one against the other.
No you don't. He thinks that if we don't have the death penalty, the most heinous offenders will get off easy. They deserve death, but will only get prison time.
Actually, I agree with this statement. But some will get off easy no matter what arrangements we make. After all, aren't some offenders who deserve death a lot worse than others? And yet they get the same punishment -- death. Aren't they getting off easy?
More important, we have no right to maintain a system that we know will execute the innocent, simply in order to inflict a more fitting retribution on those who are not.
On the other hand, maybe I am misinterpreting Goldberg. He might be denying, or merely ignoring, the inevitability of executing the innocent. He says a number of times that his favored policy is to use the death penalty, but only in cases where we are certain of guilt. He does not seem to notice that this is the policy that we actually have. We only execute people when guilt has been proven beyond a reasonable doubt -- and it doesn't work well enough.
Posted by Lester Hunt at 8:43 PM

I entirely agree with this logic.

To me, even one lost life is too many. If we begin to play with numbers of those who should be executed versus an appropriate margin of error, how do separate ourselves from the worst of the worst, who we claim to be executing?

I disagree with your view. When I watched the MSNBC show Lockup and directly saw the awful people in prison, it enforced my view that violent prisoners should be executed.

See the show and see if it effects your opinion.

All societies throughout history have made laws for unacceptable behavior. There are rules in society and violent criminals who have been convicted by their peers, should be killed.

At most, that only establishes something that I admit is true: that some people are so bad that they deserve to die. I maintain that, nonetheless, we have no right to have an institutional arrangement that will inflict death on them, because we know in advance that we will inevitably inflict it as well on some who do not deserve to die.