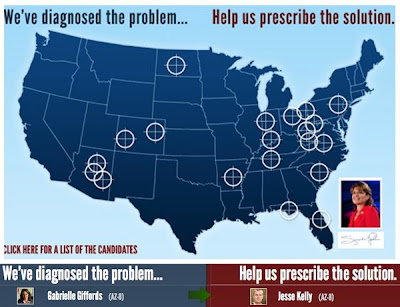 Some folks on the left, quite a few of them in fact, are now bringing out one of the silliest versions of what I call "the climate of hate theory": namely the claim that this image is, or might well be, what caused a deeply disturbed psychotic to murder at least five people yesterday in Tucson. What is the climate of hate theory? To answer that, I'm reposting below my original post on that subject. I have nothing to add to it at this time:
Just before 11:00 am, on November 22nd of my senior year at Montgomery High School in Santa Rosa CA, I was hurrying to my civics class. The hallway was packed and I was weaving between students and open locker doors when suddenly I heard the shattering news: the President had been shot, and probably killed. Once in class, we all sat in devastated silence. Suddenly Mr. Johnson, our teacher, shouted, as if to an unseen presence in the room, "I hope you are happy, Fred Schwarz!!"
Fred Schwarz?? Schwarz, whose death at the age of 96 earlier this year went completely unnoticed, was at the time a prominent speaker and giver of seminars on the evils of Communism. Liberal commentators and politicians had been grimly warning the activities of Schwarz and other anti-Communists was dangerous as they create a "climate of hate" in America that could cause violence. Mr. Johnson's instinctive reaction was to assume that it was this right wing climate of hate that killed the President.

Strangely enough, the "climate of hate" theory persisted, even after we found out that Kennedy was murdered by a Marxist defector to the USSR who was angry about Kennedy's belligerent policy toward Cuba. Within a year, Melvin Belli, Jack Ruby's attorney, described Dallas, the site of the assassination, as "a city of hate" and quoted Dist. Judge Sarah T. Hughes saying that “a climate of hate here in Dallas...contributed to President Kennedy’s assassination.” They were referring to the fact that Dallas was a center of right-wing activity of various sorts. They were not referring to the hatred in the nasty little mind of Lee Oswald himself.

When I first saw Nancy Pelosi saying that "we" should curb "our" rhetoric, I thought for a fraction of a second she meant to include rhetoric like her earlier suggestion that the town hall protesters include overt Nazis, or Jimmy Carter's claim that the "overwhelming" preponderance of their motivation is pure racism.

Of course, that's not what she meant at all. The vague comment about the late seventies probably is meant to convey the notion that former San Fransisco Supervisor Dan White (a Democrat) was moved to murder Mayor George Moscone and Supervisor Harvey Milk by the anti-gay rhetoric of activists like Republican State Senator John Briggs. She's invoking the climate of hate theory.

This theory, as I understand it, consists of two parts:

1) Angry rhetoric on the part of various mass movements has a powerful capacity to inspire violence, even on the part of people who are not members of the movement, more strangely yet, even on the part of ones disagree with it. It creates a generalized atmosphere in which unstable individuals just sort of explode, rather like popcorn kernels in a puddle of hot oil.

2) The rhetoric of liberal, socialist, and environmentalist movements does not have this capacity.

Only that of non-leftist movements has it.

Part 2 obviously does not deserve serious comment. Part 1 is also rather odd. Why do big government liberals (as opposed to the classical, J. S. Mill type) find it so obvious? It sure isn't obvious to me. Pelosi's apparent explanation of White's evil deed is the first cousin of the explanation offered by his lawyer: that White was pushed over the edge by munching sugary snacks.

The answer is probably systemic: I think the reason big government types are so prone to this idea has to do with other aspects of their Weltanschauung. There is something about their system of ideas and feelings that requires or enables this one, an idea that seems so goofy to those of us who view their mindset from the outside.
_________________
Update: As to the real connection between Loughner's "political views" and his murderous act, see this. It's the most sensible thing I've seen on the subject.

Yep, and "targeting" maps from the Democrat organizations* are A-okay. It's apparently just Palin's that's the problem. Oh, and whether or not the nutjob-murderer ever saw it is also apparently beside the point (let's please keep any logic out of this discussion).

I'm no fan of Palin's, but I'm constantly amazed at the pure seething hatred that some people have for her.