Why Don't I Like Naked Love Scenes in Movies? 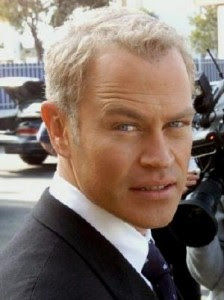 According to this story, the actor Neil McDonnough (I know him from the memorable series, Band of Brothers) has been fired from ABC's new series, Scoundrels last week for refusing to do an explicit love scene with Virginia Madsen.

The reason? He's a family man and a Catholic, and he's always made it clear that he won't do sex scenes. And ABC knew that.

Is this an unusual reaction? I really don't know for sure. I notice that, even in this age of anything goes, full frontal nudity is still rather rare in American movies. I'm told that it is much more common in European movies, but I would be willing to bet that most of the film industries in the world fall far short of the European in this respect.

W. C. Fields famously said "never work with children or animals." The obvious reason for that, I suppose, is that you never know what the damn things are going to do next. Another would be that, as long as you are on screen with a kid or a hippopotamus, the audience will not be looking at you. They will be looking at the kid or the hippo.

Sex, for human beings, especially in cultures that still have some standards of modesty in dress and behavior, is emotionally extremely powerful. If you put full frontal nudity on screen, you had better be sure that this person's pubic hair is the most important thing in the shot, because the audience will be unable to see anything else. Similarly, explicit eroticism is tremendously distracting from everything else.

In pornography there is of course nothing to be distracted from: no plot development, no characterization, no interesting dialogue, no symbolism, no subtle emotional cross-currents, etc., etc. Hence there it works completely differently. In fact, the material that would be so distracting is the very thing you are there to see.

Speaking of working with kids, take a look at this clip, from the British TV series, "Outnumbered":

The thing is that sex is such an important part of the plot and motivation of legitimate narrative film. And sex scenes can offer a great chance to enter to explore the intimate private worlds of other people and understand their relationships. I cannot think of great examples at the moment - but a famous example would be the scenes from Roeg's Don't Look Now. A better example may be My Summer of Love (not a very well known film - and i cannot really remember how explicit any of the scenes were, but can well remember the intimacy of mood created between the actors).

Non-explicit sexiness can be very distracting in a very entertaining and not embarassing way. I do not think that the intimate scenes from battlestar galactica would qualify as explicit but they were great, distracting, but also some of the most gripping and alive scenes in that series and also integral to the development of a story based on human relationships.

Many movies do seem to have a colour-by-numbers approach to adding sex scenes that is simply meant to distract you from the absence of plot - I think these are sometimes embarrasing but for me the cringe comes from the rather lame and obvious way that they are worked into the plot.

Even more than explicit sex, I got tired of a trend in Hollywood that showed protagonists going wee wee explicitly. I'm not sure what this type of footage is supposed to enhance in terms of characters or plots. I guess in Sideways when the guy is on the pot, we do appreciate through this scene that he's a terrible procrastinator, but many other examples for me were about as interesting as picking up my dog's poop.

Last Tango in Paris had very intense and character-building sex scenes I thought, but maybe by today's standards those scenes wouldn't count as explicit? I think there's a parallel to other themes, some films fail at building any suspense or drama with explosions, screams and scary music because it's so artless and predictable, where other films create unbearable tension and suspense through indirect and subtle machinery. Watching actors do deep tongue kissing is now a boring cliche, but I remember one instance I thought a prolonged shot of this kissing added a lot to the story; in Maria Full of Grace near the beginning, we know the girl is bored stiff with her life and it's dead end possibilities - working in the 'rose factory' and then seeing her boyfriend after work. The two of them engage in a deep kissing moment and convey incredible boredom - I thought it was great acting -like they were eating the same old ice cream cone again that they were sick of, but there wasn't anything better to try.

One frontal nudity scene that comes to mind is in the Godfather when Michael takes his Sicilian bride. It is a showing of the female's submissiveness to Michael who represents the prototypical Sicilian male. In the later stories when he marries Kate she represents the mid 20th century American woman trying to free herself from the old world values and gender roles. The initial nudity serves a purpose in telling the story.

Thanks for your thoughtful comments. I think I should post again about this soon. I think my original post seemed too dismissive of full nudity and explicit eroticsm in movies.

Interesting analysis Ken. Something very 'Elvis' about it.

I have read James Caviezel refuses to kiss another woman on a set and I believe they have used his real wife as a stunt double. I don't comprehend how Neal McDonough's religion ties into his opposition of love scenes. Catholicism does not prohibit your choice of profession-unless it conflicts with church policy. Then again, it would only determine that you should not receive communion. I can't help think these men have other unresolved issues.

I don't buy it. If it's in his contract that he won't do love scenes, then they can't fire him for not doing them. But in general, WTF? No one is asking him to commit adultery - it's ACTING. That's like refusing to play Macbeth, because murder is wrong. He's not cheating on his wife by _pretending_ to fool around with Virginia Madsen.

You've got a point there. His reasons for not caring for sex scenes are undoubtedly moral, while my reservations are aesthetic.

Still, I would imagine his reasons aren't as silly as you make them sound. He probably thinks that it is immoral to represent sex and nudity for purposes of titillation. I'm guessing of course, but that is a common view among conservative Christians.

[I've been meaning to post on this again but haven't gotten around to it yet.]

But on that view, wouldn't it also be immoral to represent murder for purposes of titillation? He's played some seriously immoral characters; fornicating with Virginia Madsen is the least of his problems.

Once again, I'm putting myself into an alien world view, but I imagine on his view it is immoral to depict even legitimate sex for purposes of titillation. That is, its the depiction and purpose of the depiction, and not the evil of the act depicted, that is wrong.

That said, I think I would be sympathetic to the idea that it is immoral to create and display, for profit, a murder scene that is supposed to be titillating in the way that a steamy love scene is supposed to be: ie., where people are supposed to enjoy seeing the act committed as something pleasant in and of itself.