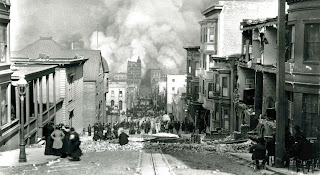 This is a repost of one that I posted two years ago. Today is the 105th anniversary
At 5:12 in the morning, 103 years ago, San Francisco photographer Arnold Genthe was awakened by a terrifying sound. His entire collection of Chinese porcelain was pouring out of the shelves onto the floor. One of the worst natural disasters in history had begun. As he remembered later, he went out to find a man in a swallowtail coat standing dazed in the street. A policeman approached the man: "Say, Mister," he said, "I guess you better put on some pants."

Finding his cameras had all been destroyed, Genthe borrowed a Kodak and, stuffing his pockets with films set out to immortalize the horrors with photos like this one, showing Sacramento Street, looking toward the bay. As he said of it in his memoirs, it

shows, in a pictorially effective composition, the results of the earthquake, the beginning of the fire and the attitude of the people. On the right is a house, the front of which had collapsed into the street. The occupants are sitting on chairs calmly watching the approach of the fire. Groups of people are standing in the street, motionless, gazing at the clouds of smoke. When the fire crept up close, they would just move up a block.

All that was left of the Towne Residence was its entrance. Someone named Genthe's picture of it "The Portals of the Past." When the entrance was moved to Golden Gate Park, that is what it was named. It is mentioned, memorably, in the classic film Vertigo.

Within hours, a committee of wealthy citzens met and asked to mayor to draw checks of any amount to relieve the suffering of the devastated population. They would guarantee the checks.

Soon, another remarkable event began. The rebuilding of the city. While the ruins were still smoking, a sign went up on a collapsed wall: "On this site will be erected a six-story office building to be ready for occupancy in the Fall." A year to the day after the earthquake, the new Fairmont Hotel opened. Within a decade San Franciscans celebrated the rebirth of their city with the Panama Pacific Exposition. 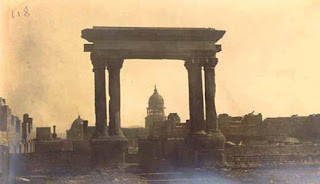 San Francisco is the only American city that has a consistent architectural style. That is no doubt because it had to be built all at once. Luckily, this happened at a moment in history when the styles were particularly elegant and beautiful -- and somehow they seem especially appropriate to a city with its arms open to the sky, the mist, and the sea. The result that beloved white city of bay windows, turrets, and elaborate sawed wood ornamentation.

Happy re-birthday, San Francisco!
Posted by Lester Hunt at 9:56 AM

What is amazing is that all this will happen again. Mother nature has a way of showing up in very inconvenient ways at very inconvenient times. When this happen it exasperated a financial crisis leading to a full blown financial panic. It was this earthquake and the subsequent bank failures which lead to the establishment of the Federal Reserve in 1913. This series of events laid the foundation for the justification of the Fed. I do wonder: if we have natural disaster today, how the financial system will hold up? I can tell you that if insurance companies try to liquidate their assets to pay claims on a super-catastrophe(this would need to be done) they might get shocked at to how little their assets are ultimately worth. An act of mother nature with the U.S. economy and financial system in this amount of peril would be unprecedented. All we can do is "hope"

That's interesting about the Fed. I had never researched the economic consequences of the disaster. I did read recently that the death toll was deliberately lied about by the media of the day (saying it was barely over 300, when it was about ten times that, at least) in order to avoid a financial panic. So it didn't work.

From wiki on the Federal Reserve Act: "For nearly eighty years, the U.S had been operating without a central bank after the charter for the Second Bank of the United States expired. However, after various financial panics, particularly a severe one in 1907, there was a growing consensus in the American financial community that some sort of banking and currency reform was needed which could provide a ready reserve of liquid assets in case of financial panics and would also provide for a currency that could expand and contract as the seasonal U.S. economy dictated." I find it funny to hear today, "never waste a good crisis." An intersting read on the Federal Reserve is a "The Creature from Jekyell Island." The guy who wrote it has a bit more of conspiratorial tone, but he has excellent research. Jessy Livermore found out the goverment was lying about the inital damage and went heavily short the stock market and made a bundle. from wiki: "During his lifetime, Livermore gained and lost several multi-million dollar fortunes. Most notably, he was worth $3 million and $100 million after the 1907 and 1929 market crashes, respectively. He subsequently lost both fortunes. Apart from his success as a securities speculator, Livermore left traders a working philosophy for trading securities that emphasizes increasing the size of one's position as it goes in the right direction and cutting losses quickly."