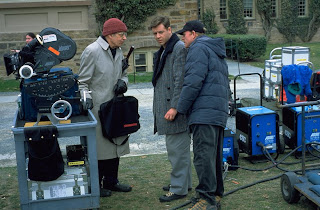 I just read Sylvia Nasar's absorbing, novel-like biography of the great mathematician John Nash (A Beautiful Mind: Simon and Schuster, 1998), who eventually won the Nobel for economics. I also finally viewed the 2001 movie based on it. The movie surprised everyone by sweeping the Academy Awards -- how can a movie about a a man of ideas be popular?

Well, as you may know, they did it by cheating: the movie isn't about Nash's ideas at all but about his battle with schizophrenia (among his heroes were Nietzsche and Newton, also men of ideas who went insane).

The one scene in the movie where the screenwriter tries to explain a Nash idea -- the Nash equilibrium, an idea from his dissertation for which he won the Nobel -- is so bad it virtually inverts the meaning of the idea involved. Apparently, there was no math or econ technical advisor on this production at all.

The scene takes place in a bar, where Nash says "If we all go for the blonde and block each other, not a single one of us is going to get her. So then we go for her friends, but they will all give us the cold shoulder because no on likes to be second choice. But what if none of us goes for the blonde? We won't get in each other's way and we won't insult the other girls. It's the only way to win. It's the only way we all get laid. ... Adam Smith said the best result comes from everyone in the group doing what's best for himself, right? Adam Smith was wrong! The message: Sometimes it is better to cooperate!"

Wow. How many things are wrong with that? They begin with the admittedly technical-sounding fact that Nash's idea only concerns non-cooperative games and makes no comment on cooperation.

Here's one thing that I think is fairly important. The writer is obviously thinking of Adam Smith's famous statement: "It is not from the benevolence of the butcher, the brewer or the baker, that we expect our dinner, but from their regard to their own self interest. We address ourselves [ie., in trading with them], not to their humanity but to their self-love, and never talk to them of our own necessities but of their advantages."

Smith is definitely not saying that self-interest somehow generally leads to doing what is in the interest of the other. He is talking about the butcher, the brewer, and the baker. In other words, he is taking about markets. He is not, for instance, talking about warfare, which is a situation where self-interest typically tends to be very detrimental to the other person. The Prisoners' Dilemma, which was first formalized by Nash's dissertation adviser Albert Tucker, is a situation in which uncoordinated self-interest is suboptimal both for the self and the other.

In the book, Nasar actually says that the connection to Smith here is positive. She contrasts Nash in this respect with the great founder of game theory, John von Neumann. Von Neumann, she claims, tended to think that in order to establish social order "players would have to form coalitions, make explicit agreements, and submit to some higher, centralized authority." To Nash, on the other hand, "individual rationality and self-interest, not common agreement on some collective good, seemed sufficient to create a tolerable order." Thus, she says, he gave "economics an updated, far more sophisticated version of Adam Smith's great metaphor of the Invisible Hand." (pp. 14-15)

Updating is very different from revising.

Human beings tend to find many of the basic ideas of economics deeply counterintuitive. This is very important, as it may mean that no democracy can have an economic policy that makes any sense. One of these troublesome basic ideas is that from the uncoodinated interactions of self-interested individuals social order can emerge. Nash's idea was a contribution to understanding this crucial fact.
Posted by Lester Hunt at 2:07 PM

Like you, I really enjoyed the Nasar biography, but found the movie abysmal. I thought the amount of "cheating" done incredible. Not only did they seem not to have a technical advisor, they didn't seem to have advisors on some other crucial aspects either:

2) Nash's patriotism? That seemed completely groundless and (I thought) almost a bit offensive since it seemed to be playing into Iraq War fervor.

I was quite surprised they were able to take such liberties(?) and that Nasar didn't seem to protest at all.

You are right on both counts.

As to point #2, as you know, while he was schizophrenic he became very anti-Cold-War and tried to renounce his citizenship. One thing in the book that I found amusing: he eventually decided that thinking about politics was part of what was making him crazy. Like Nietzsche, I more than suspect that it has a bit of that effect on all of us.

Interesting post. I now want to read the book on Nash. I did see the film years ago, and had not planned to see it, based on the unbelievably bad ending of Gladiator with Russell Crowe (maybe that wasn't Crowe's fault, though.) I confess I found the film 'Beautiful Mind' quite riveting and thought Crowe did very well in this role. It's a shame they so totally botched the Nash Equilibrium - does Hollywood ever get abstract or complex ideas right? I didn't know about the imaginary friends issue - maybe the filmmakers were struggling with how to make ongoing delusion more tangible for a general audience? I read recently that writers such as Dan Brown, John Grisham and Stephen King write prose intentionally at the 7th-grade level - to reach wider audiences. Kind of sickening. It explains a lot, if you've ever read the sentence 'craft' of any of these guys. Back to Beautiful Mind the Movie; I grew up with a mother who was diagnosed as a schizophrenic, and saw the episodic battles she went through the last ten years of her life, before she took her own life. The details were different, but the sudden onsets of Nash's illness actually made the hair on my neck stand up - they rang very true to my memories as a kid and how this illness jars the family, specifically those periods of relief and rest when the patient may still be depressed or not doing much, but is not delusional, the overwhelming comfort of having the patient emotionally connected to you again. Then the torturous vigil and anxiety when one begins wondering whether a statement or action of the patient is a signal that they are lapsing back into insanity - then the full-blown realization that they are, when they do something just off the wall. I did think the film captured that rhythm. It would have been a different and more interesting story, if they'd figured out how to include his ideas, though.

And certainly thinking too much about politics these days can be crazy-making for the sanest of us! :-)

Wow. I must admit that I find the fact that you found the film has the ring of truth very impressive.

Hi Lester,
Personally, I have never seen mental illness portrayed in other films quite the way Beautiful Mind did. Films often seem to like the melodrama of a Jane Eyre-type female wandering the halls of an old house, or something. Speaking of films, I'd love your take on Slumdog Millionaire. I saw it recently and am still processing it in my mind. It seemed amazingly complicated visually and emotionally, even with the fairly straightforward plot elements.

I liked the treatment of schizophrenia in "I Never Promised You a Rose Garden," both autobiographical novel and movie -- though I see in Wikipedia that some experts now doubt that "Hannah Green" (a pseudonym) was really schizophrenic.

I liked "Slumdog" though like you there are aspects of it I am not sure about. I'll try to write a post about it in the next day or two.