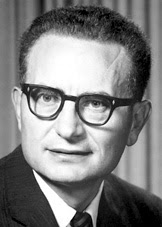 Economist Paul Samuelson died on the thirteenth. His text, Economics, was for decades the most widely used econ text, probably in the world. I once heard it described as the biggest selling textbook on any subject. His influence was literally incalculable.

Samuelson famously said: "I don't care who writes a nation's laws–or crafts its advanced treaties–if I can write its economics textbooks."

This week, a less well known quotation has been reported in the blogs. Allegedly, in the 1989 edition of his text, he said this: ""The Soviet economy is proof that, contrary to what many skeptics had earlier believed, a socialist command economy can function and even thrive."

As every schoolboy knows, that date, 1989, indicates that Samuelson wrote this just before the Soviet Union collapsed from internal rot.

Other Samuelson quotes reported this week include these:

'It is a vulgar mistake to think that most people in Eastern Europe are miserable." [1981]

"What counts is results, and there can be no doubt that the Soviet planning system has been a powerful engine for economic growth...The Soviet model has surely demonstrated that a command economy is capable of mobilizing resources for rapid growth." [1985]

Surely, he is a tragic instance of the fact that academic prestige and technical proficiency can go together with disastrous ignorance and error in things that really matter. Indeed, the one can conceal and propagate the other.
Posted by Lester Hunt at 2:05 PM